Earthquakes, volcanic eruptions and other disturbances triggers a series of water waves that are called Tsunami. They can last from minutes to hours. Water waves are caused by displacement of a large volume of water.

Other underwater explosions, landslides, glacier calving, meteorite impacts and other disturbances have the potential to trigger a tsunami.

Tsunami mostly arrives in a "wave train", where one after another come and go causing more destruction. Just before the waves of Tsunami, a "drawback" (where waves fall back exposing a lot of submerged area) occurs.

In 2004 a tsunami in Indian Ocean took life of nearly 2,30,000 people killed in 14 countries. It was considered one of the deadliest natural disasters in history.

Japan has the longest recorded history of tsunamis because it is earthquake prone area.

Tsunamis have small wave height offshore, and very long wavelength. They grow in height when they reach shallower water. A tsunami can occur in any tidal state and even a low tide can submerge coastal areas. 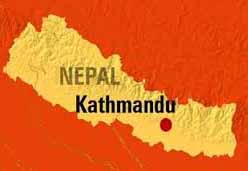 Another Earth quake occurred today of 6.8 magnitude around 12.39 pm IST (Indian Standard Time) at a depth of 10 Km with its Epicentral Region located in Nepal about 65 Km east of Kathmandu. Its Latitude and Longitude are 27.71 N and 85.91 E respectively.

New Delhi, April 12 (IANS) A day after a massive earthquake close to Indonesia triggered fears of another tsunami, India Thursday called for greater cooperation with nations of the Southeast Asian region to meet growing non-traditional security threats such as natural calamities, epidemic, piracy and transnational crimes.

London, April 11 (IANS) The nature of the massive earthquake that struck off Indonesia Wednesday makes it "less likely to produce a destructive tsunami", an expert said.

Jakarta, Apr 11 (ANI): A massive 8.7 earthquake has struck off the western coast of Indonesia triggering fears of a "devastating" tsunami. 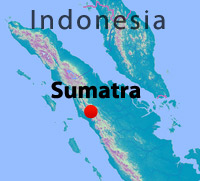 The recent Earthquake, which hits Indonesia and many countries including India, has once again raised the memoirs of Tsunami.

Jakarta, Apr 11 (ANI): A massive earthquake has hit the West Coast of Sumatra, at a magnitude of 8.7 on the Richter scale. 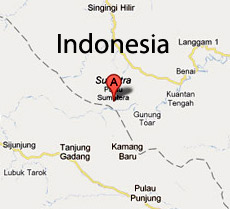 An earthquake of 8.9 magnitudes has hit Indonesia. After which Indonesia has issued a tsunami warning. Besides Indonesia, tremors were also felt in 28 countries.

Washington, Mar 14 (ANI): The height of a tsunami wave when it approaches a coastline is influenced greatly by the topography of the seafloor near the coast, a new study has revealed.

Washington, Mar 14 (ANI): The height of a tsunami wave when it approaches a coastline is influenced greatly by the topography of the seafloor near the coast, a new study has revealed.

New Delhi, Feb 13 (ANI): Asserting that terrorism continues to remain a grave concern to world peace and stability, Defence Minister A.K. Antony on Monday said the various nations must draw up collective and innovative measures to counter and defeat such asymmetric threats.

New Delhi, Jan.12 (ANI): Until the last weekend there was surreal theatre in Pakistan with shadows boxing each other. The main players in the developing political confrontation were Nawaz Sharif and Imran Khan with Pervez Musharraf an incongruous joker in the pack as they all expected to be sworn in as Prime Minister. Imran used the bad metaphor of Tsunami and as it now turns out there is indeed a tsunami sweeping the body politic of Pakistan.

New Delhi, Dec 28 (ANI): External Affairs Minister S.M. Krishna on Wednesday said the India-Japan bilateral relationship is a splendid example of a successful and effective foreign policy working for the benefit of the people of the two countries.

Memogate who is next to go and what is at stake? (Article)

London, Dec 27 (ANI): When memo scandal was named as a 'memogate', it was clear that it was not an ordinary scandal. This scandal was called 'memogate' because of Watergate scandal in America which led to down fall of the then President of America, Richard Nixon.

Jakarta, Dec 23 (ANI): An Indonesian girl who was considered lost in the tsunami that engulfed Aceh in December 2004 has found her way back to her home in Lr Sangkis, West Aceh.

Need to build on all existing measures to combat piracy: Krishna

Imran Khan- Just landed or has he just arrived

Gurgaon, Nov.3 (ANI): The speech (at least on YouTube) lasted about 50 minutes, the mood euphoric, the crowd was raucous at times and the slogans were the usual eulogies 'Pakistan Zindabad and Imran Khan Zindabad' almost in the same breath.

Tokyo, Oct 13 (ANI): Japanese researchers have found high levels of radioactive material in concentrated areas in Tokyo and Yokohama, more than 150 miles away from the Fukushima Daiichi nuclear plant that was crippled by the March 11 earthquake and Tsunami.

Tokyo, Aug.19 (ANI): A tsunami advisory that was issued after a 6.8-magnitude earthquake hit off Japan's northeast coast this afternoon has been lifted.

Washington, Aug 9 (ANI): For the first time scientists have been able to observe the power of an earthquake and tsunami to break off large icebergs a hemisphere away.

Washington, July 15 (ANI): An airglow signature in the upper atmosphere produced by a tsunami has been recorded for the first time ever by University of Illinois scientists using a camera system based in Maui, Hawaii.

Mainz (Germany), July 12 (ANI): Olympia, site of the famous Temple of Zeus and original venue of the Olympic Games in ancient Greece, was presumably destroyed by repeated tsunamis that travelled considerable distances inland, and not by earthquake and river floods as has been assumed to date.

Canberra, July 4 (ANI): A powerful tsunami, much bigger than the ones seen in the recent centuries, would 'inevitably' hit eastern Australia, the Australian Tsunami Research Centre has claimed.

New Delhi, May 21 (ANI): Calling a financial crisis a 'Credit Tsunami', Union Law Minister Veerappa Moily has emphasised the need for a comprehensive legal mechanism to avoid a repeat of global financial crisis.

Bhatta Parsaul (Uttar Pradesh), May 12 (ANI): The late night arrest and subsequent release of Congress general secretary Rahul Gandhi at the epicenter of the farmers' unrest here, has transformed him into a new avtar --- a farmer leader.

Stradivarius violin to be sold for Japan tsunami victims' relief

Tokyo, May 3 (ANI): A well-preserved Stradivarius violin, the Lady Blunt, which had fetched ten million dollars at its last sale in 2008, would reportedly be auctioned to raise money to help Japan's earthquake-cum-tsunami victims.

Washington, Mar.31 (ANI): Yemeni-American cleric Anwar-al-Awlaki, who is a top propagandist for Al-Qaeda, broke his silence on the uprisings in Middle East and claimed that Islamist groups are elated by these revolts.

Beijing, Mar.17 (ANI): China has suspended approval for nuclear power stations so as to revise safety standards in the wake of recent explosions at Japan's Fukushima nuclear plant.

Tsunami will cost Japan in excess of 100 billion pounds

London, Mar. 15 (ANI): The tsunami that hit northeast Japan last Friday is expected to be the world's most expensive natural disaster, with predictions that the repair bill will top 100 billion pounds.

Minamisoma (Japan), Mar. 14 (ANI): Japanese troops have rescued a 60-year-old man who floated 15 kilometers out to sea on the roof of his home after a tsunami engulfed the country's northeastern coast on Friday.

Washington, Mar 12 (ANI): Celebrities took to their Twitter pages to tweet their heartfelt condolences to the earthquake and Tsunami hit victims of Japan.

Kuala Lumpur, Mar.12 (ANI): The head of Malaysia's meteorological department has said the country is unlikely to experience severe chain effects from the tsunami.

Washington, Mar 12 (ANI): Actors Kristen Stewart and Taylor Lautner along with the rest of the cast of 'Breaking Dawn' had to be evacuated from Vancouver Island due to Tsunami fears.

Tokyo, Mar 11 (ANI): The devastating tsunami following an 8.9 earthquake magnitude off the northeastern coast in Japan has reportedly killed over hundreds of people and injured many others.

No immediate danger to India because of tsunami: Ashwani Kumar

New Delhi, Mar 11 (ANI): Minister of State for Earth Sciences and Science and Technology Ashwani Kumar today assured the people not to panic on account of tsunami in Japan.

Tokyo, Mar 11 (ANI): The devastating tsunami following a 8.9 earthquake magnitude off the northeastern coast in Japan has reportedly killed 23 people and injuring many others.

Tokyo, Mar 11 (ANI): Japanese Prime Minister Naoto Kan on Friday said that the country's disaster management operations have been activated to counter the after effects of earthquake-cum-tsunami measuring 8.9 in the Richter Scale.

Tokyo, Mar. 11 (ANI): North east Japan was hit by a massive earthquake on Friday, which rocked buildings in Tokyo and triggered a tsunami that dashed ships onto Japan's northeast coast and sweeping cars through the streets of coastal towns.

Now, a system that can warn about tsunamis within minutes

Washington, Mar 5 (ANI): Soon, people would be able to get warning about an impending tsunami within minutes of an earthquake.

Now, a system that can warn about tsunamis within minutes

Washington, Mar 5 (ANI): Soon, people would be able to get warning about an impending tsunami within minutes of an earthquake.

Washington, Jan 3 (ANI): A 7.2 magnitude earthquake has been detected in the Pacific near the central coast of Chile, US authorities have said.

Chennai, Dec.26 (ANI): Over hundred fishermen and fisherwomen gathered at the Marina Beach here on Sunday to pay homage to those who lost their lives in the tsunami disaster in 2004.

Washington, Dec 24 (ANI): Six years after the tsunami disaster of December 2004, the set-up of the German-Indonesian Tsunami Early Warning System for the Indian Ocean (GITEWS) has been completed.

Porbandar (Gujarat), Dec 9 (ANI): To mark Navy Week celebrations, officials of the Indian Navy put on a display of daredevil stunts and conducted mock rescue operations in the coastal city of Porbandar.

New Delhi, Nov 9 (ANI): The Rajya Sabha has been adjourned for the day on Tuesday as a mark of respect to Dr Arjun K. Sengupta, who breathed his last on September 26 at the All-India Institute of Medical Sciences after a brief illness.