Everything you need to know about Sabeer Bhatia: news, reviews, in-depth analysis, opinion and more

Sabeer Bhatia is the web and Internet magnate of India who is the founder of Hotmail-an Internet portal of the net system. Bhatia was born in Chandigarh, India and was educated in Birla Institute of Technology Pilani, and in the Stanford University America. After his Bachelor Degree in California Institute of Technology Sabeer took up a brief job in Apple computers as a hardware engineer. There he got amazed by coming across the vastness of computer systems and the web. By the cooperation and coordination of his friend Jack Smith, Sabeer realized his dream in establishing Hotmail in 1996. Adding to his credit Hotmail today appears as the largest e-mail provider with over 50 million users worldwide. Due to his sincere efforts and devoted work for his organization, Sabeer could see the rapid rise of his web entrepreneurship until it was acquired by Microsoft in 1998. This triumph of Bhatia as the first Indian to climb a great height in this standpoint has earned him widespread reputation and he has been acclaimed throughout, for he has been honored with Entrepreneur of the year award-1997. As one of the youngest innovative leaders he is the recipient of TR100 award presented by MIT to the young leaders. 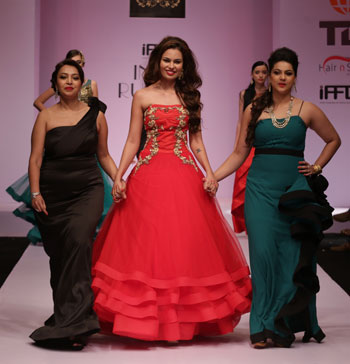 Complete coverage of the India Runway Week 2014 which happened from 19th - 21st September 2014 which was organized in Delhi.

New Delhi, Apr 30 (ANI): The Indian shooting contingent, including Abhinav Bindra and Gagan Narang, returned home on Monday after being forced to spend a night in a hotel lobby due to managerial negligence.

Cuttack, April 23 (IANS) The following is the scoreboard of the match between Deccan

New Delhi, April 20 (IANS) Tamil actress Tamanna Bhatia has been roped in as the face of soft drink brand Fanta. She will be its brand ambassador in Tamil Nadu and Karnataka.

We have been inconsistent: Gilchrist

Mohali, April 19 (IANS) Kolkata Knight Riders captain Gautam Gambhir praised his bowlers for restricting the Kings XI Punjab to a low score on a flat track and gave them the credit for the convincing victory Wednesday night in the Indian Premier League (IPL) clash here.

Dubai, Apr 19 (ANI): Former Sri Lanka skipper Arjuna Ranatunga has criticized the Indian cricket board for harming the game through the Indian Premier League as it will now produce butchers, instead of better Test players.

Dubai, Apr 19 (ANI): Former skipper Arjuna Ranatunga, who is on a mission to rescue Sri Lankan cricket, has lashed out at his cricket board as well as the Board of Control for Cricket in India (BCCI) for harming the game through the Indian Premier League.

New Delhi. April 14 (IANS) Resident Welfare Association's (RWAs) of Delhi have made an appeal to its citizens to come out and vote for clean candidates with good image rather than party lines in the municipal elections Sunday.

Kolkata, April 6 (IANS) Scoreboard of the second match of the fifth season of the Indian Premier League (IPL) between Kolkata Knight Riders and Delhi Daredevils at the Eden Gardens here Thursday.

New Delhi, March 31 (IANS) With just 88 days left for the 2012 London Olympics, Indian shooters Joydeep Karmakar and Heena Sidhu, who have qualified for the Games, Saturday rued the delay in getting government funding as it would hamper their training schedule.

New Delhi, Mar.7 (ANI): The 4th BRICS Academic Forum has recommended to the forthcoming BRICS Leaders Summit to consider studying the establishment of financial institutions such as a Development Bank and an Investment Fund that can assist in the development of BRICS and other developing countries.

New Delhi, Mar.7 (ANI): The 4th BRICS Academic Forum has recommended to the forthcoming BRICS Leaders Summit to consider studying the establishment of financial institutions such as a Development Bank and an Investment Fund that can assist in the development of BRICS and other developing countries.

Amritsar, Jan.23 (ANI): Centenarian Fauja Singh, who is widely regarded as the "Pride of Punjab" because of his age-defying marathon stints, wowed school children and senior citizens here on Sunday be taking part in Amritsar City's first ever 'Run for the City' and 'Citizen Walk'.