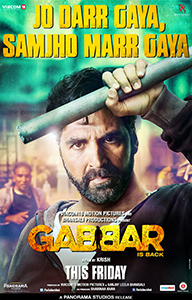 The Gabbar is Back is starring the famous actor Akshey Kumar in the lead role. This movie is creating the waves since the first poster was launched. The previously released trailer of the movie was also very popular in the mass. And it received huge 4.5 million hits on the Youtube Video website.

One of the most anticipated films this summer, Gabbar is Back has been creating waves ever since the launch of its first poster. From the launch of a teaser campaign that touched a mammoth 1 million grass root level touch-points to a ground-breaking promotional strategy trailer made to engage with the common man has amounted to scores of people cuing up at theatres this Friday.

Here is the day wise collection details of the Gabbar Is Back Hindi Movie:

At total of Rs 71.36 Cr is collected in just 10 days of release. This growing collection shows that people have given a thumbs up to the film.

Gabbar is Back marks the second collaboration of Viacom18 Motion Pictures and Sanjay Leela Bhansali along with Co - Producer Shabinaa Khan. With a powerful story line and ace actor Akshay Kumar whose name is synonymous with action, this film based on an aam aadmi waging war against corruption is being widely received by the masses.

Along with Akshay Kumar, the ensemble cast of Shruti Hassan,Sunil Grover, Suman Talwar and a friendly appearance by Kareena Kapoor Khan have all given a power packed performance under the brilliant direction by Krish- who has made his Directorial debut in Bollywood with this film.