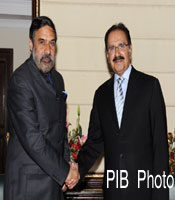 India and Pakistan announced to create a new opportunity in business tie up and are ready for exploring the possibilities of opening more routes to deepen economic engagements. Both the govt. have directed to its officials to discuss and find out the possibilities for new routes and customs stations.

It is noted that Fahim is on a three-day visit to India, which is his second visit to Delhi in the last seven months.

Both the ministers expressed the wish that discussions may continue at the official level for possibilities of opening more land customs stations between both countries.

This would enhance greater economic engagement between business communities of both sides and deepen bilateral cooperation for mutual prosperity of their people.

It is noted that both the countries had agree on the point in principle to allow investments from Pakistan. Pakistan is the only country from where foreign direct investment is not allowed into India.

During the meeting both sides expressed satisfaction at the joint and coordinated efforts made for making the new gates at the Attari Integrated Check Post functional for trade. The check post was opened on Friday.

Both the ministers expressed the desire that the trade in petroleum products and electricity must be on fast track and concerned officials should work for the same.