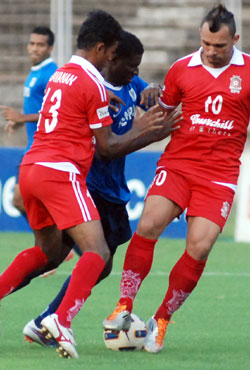 Churchil brothers defeated Dempo by 4-2 in a highly exciting match in the ongoing I-League. However Dempo consolidate their position at the top of the table with 50 points from 23 matches while Churchill stay on 41 from 23 matches.

In a match where fortunes fluctuated from one end to the other Dempo did well to snatch full points after but Churchill had threatened to steal the thunder from right under their nose. It was Cliff Miranda who gave Dempo a 37th minute lead but Churchill fought back to level scores just before the change of ends.

Once again Roberto Mendes struck again to put Churchill ahead for the first time in the match but Dempo's Nigerian strikers Ranti Martins and Koko Sakibo turned the match on its head with delightful strikes inside the first hour. Rowilson Rodrigues scored the fourth goal for Dempo five minutes from close.

The match was tight at the start but it was clear that Dempo were enjoying better spells thanks to their fluidity. In one such fluid attack, Clifford Miranda did well to get at the far end and slip the ball past Churchill goalkeeper Arindam Bhattacharya.

At the start of the second session, Roberto scored again, this time making the most of a goalmouth melee, finishing by placing the ball beneath the legs of Dempo goalkeeper Subhashish Roy Chowdhury.

Dempo did not wait for long to secure the equalizer as Ranti volleyed home from just outside the box and then Koko sealed full points with a stunning run and an exquisite finish.

The win gave Dempo a seven point advantage over second placed Pune FC and with just three matches left to be played, this could prove decisive.