Akshay all set to regain his Khiladi Avatar 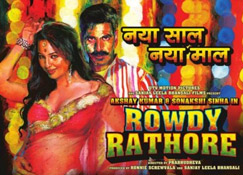 Akshay Kumar famous as the Khiladi of Bollywood will soon be seen in the silver screen in his old style in his upcoming movie "Rowdy Rathore". The movie is an action flick directed by Prabhu Deva which is to be released later this year.

Akshay have been away from action from last few years but now he is all set to start the new innings of "khladi" with his new release.

"It's been some two to three years that I have stayed away from action movies. It's because when my son (Aarav) was two years old, I was scared that what if something happened to me...that's why I was off action," Akshay said on Monday night.

The 44-year-old actor is much known for his hearth taking stunts and action and has already given a number of action hits including "Khiladi", "Khiladiyon Ka Khiladi", " Sabse bada Khiladi", "Waqt Hamara Hai", "Mohra" and many more.

After that he took a break with action and switched to comedy and was successful in that avatar too with a number of hits like "Hera Pheri", "Garam Masala", "Phir Hera Pheri", "Bhagam Bhaag", "Welcome", "Singh Is Kinng" and "Housefull" in his list of hits.

"Rowdy Rathore" is an complete action flick that promises his fans to see his khiladi avatar once again.

"Every father would understand the emotion behind the decision of withdrawing from action because nothing else matters for parents than the children's happiness and well-being." He said.

"But now my son is nine years old. God forbid if something happens to me, he can do something... So I am back to action, and absolutely ready for another innings," said Akshay.

Akshay is busy in the promotion of his latest upcoming comedy move "Housefull2" which is all set to release on April 5 this year.

- with inputs from ANI.