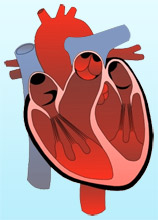 Mouth bugs flowing into the bloodstream are reported to clot the blood and elicit endocarditis or inflammation of heart's inner tissues that can be pernicious.

Infective endocarditis is treated with the help of surgery or by using strong antibiotics but with the growing antibiotic resistance it is becoming very difficult.

"About 30 percent of people with infective endocarditis die and most will require surgery for replacement of the infected heart valve with a metal or animal valve," said Helen Petersen, Royal College of Surgeons in Ireland (RCSI) who led the study.

Researchers from the RCSI and the University of Bristol have discovered that Streptococcus gordonii produces a molecule on its surface that makes it capable of acting as a clone to the human protein fibrinogen which is responsible for blood-clotting.

This makes the platelets active, causing them to accumulate inside blood vessels. This unwanted blood clot traps the bacteria and protects them from the immune system and from antibiotics that may be used for the treatment, according to a Royal College statement.

Clumping of Platelets can lead to growths on the heart valves (endocarditis), or inflammation of blood vessels leading to the blockage of blood supply to the heart or brain.

"Our team has now identified the critical components of the S. gordonii molecule that mimics fibrinogen, so we are getting closer to being able to design new compounds to inhibit it. This would prevent the stimulation of unwanted blood clots," said Steve Kerrigan from the RCSI.

The details of the findings were presented at the Society for General Microbiology's Spring Conference in Dublin this week.