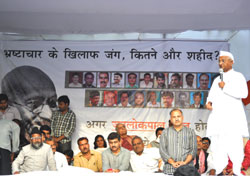 Anti-corruption crusader Anna Hazare on March 25 broke his one-day long token fast with demanding people to let him support in order to keep on pressure over the government so that in intense pressure, government becomes ready to pass strong Lokpal bill in Parliament and to implement it in the system before next general parliamentary election scheduled in 2014.

Moreover, he also informed that only implementing strong lokpal bill was not our motto but to reform the alleged 'rotten' system by fighting for 'right to reject', to make strong village Panchayat (Gram Sabha) and to improve the poor condition of farmers.

According to police, around 2,000 supporters were at the venue for the anti-corruption mass protest.