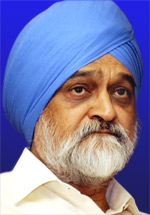 The Planning Commission that was earlier denying to review the recent release of poverty estimation data till Tuesday, has on Thursday has decided to re-organized another technical committee to re- evaluate it.

This change in Commission's decision came after Prime Minister's intervention who is facing severe criticism over plenty of topics including inflation and corruption.

Minister of state for Planning, Ashwani Kumar in a press conference said that Tendhular's committee methodology was being scrapped as it was far away from the existing realties.

"In the last 8-9 years since Tendulkar committee was constituted there has been a lot of change in perception of poverty," said Kumar by adding that the government has decided to set up a technical group to revise the methodology for estimating poverty in a manner consistent with the current realities.

Earlier, Rural Development Minister Jairam Ramesh has said that poverty line would not be linked with any entitlements provided by the Centre and it should reflect position on the ground rather than imposing an 'artificial' cap.

Finally Montek Singh Ahluwalia, the Deputy Chairman of Planning Commission has confirmed this report that a new technical committee will be organized and it will take two-three months in organizing a new committee.

The Tendulkar's committee on Monday released a fresh poverty line report estimating that India's poverty has dipped to 7.4% from 37.2% to 29.8%. It's estimation was based on a poverty line of Rs. 29 per day per capita expenditure for people in urban areas and Rs.22 per day per person for those in rural areas, which has been criticised for being too low.