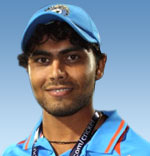 With the beginning the auction process, Ravindra was in the limelight and every team made a bid on him whose base price was $100,000 but a tie- breaker invoked when two franchises – Chennai Super King (CSK) and Deccan Charges – bid the maximum $2-million. After hitting the upper cap, which was allowed for a team, the franchises were asked to bid a secret amount and CSK won the bid. However, the bidding amount was not disclosed.

But, as per the conditions of the contract Ravinder would get only $9,50,000 as the abandoned Kochi Tuskers Kerala (KTK) had bought it in the same price last year. The remaining amount would go into BCCI's coffers.

The Captain of KTK, Mahela Jayawardene who was bought at $1.5-million in last year's auction has been bought down by Delhi Daredevils in $1.4-million. However, he will get $1.5-million as per condition of the contract and BCCI would pay the remaining amount to him.

Giving a big surprise to all, Indian medium pacer Vinay Kumar became the third million dollar boy who was bought by Royal Challengers Bangalore in $1-million against his base price of $100,000.

The struggling performance of Laxman in England and Australia and the mark of a Test player along with his age (37) reportedly became the prime reason for his unsold status. This time, the franchises showed no interest in the prime players of the national teams such as James Anderson and Peter Siddle, as there is a huge chance that these players would not available for playing in IPL for their involvement in international matches.

The other players who got big prices are: