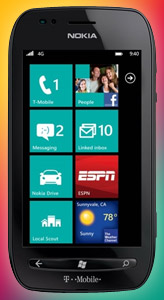 Nokia Lumia 710 T-Mobile is the second Windows-based smartphone launched after the tie up of Nokia and Microsoft. Unlike Nokia Lumia 800, it is said to be targeting the low-end customers. It is said to be available in just 49.99 USD in America. T mobile will sell this phone.

It has a unique design of its own which is slick, stylish and quiet handy. Steep curves and beautiful look of this phone can really lure people who lust for a trendy and techy mobile. Lets take a look at phone's features.

Weighing just 126 grams, it will rest on your palm with ease. Nokia Lumia 710 has a dimension of 119 mm x 62.4mm x 12.5 mm. It operates on Windows 7.5 Mango operating system. An Internet browsing and other phone operation becomes easy with this phone as it has a built-in Qualcomm MSM8255 Snapdragon (WCDMA) chipset and a 1.4 GHz Scorpion processor. Gaming and online video can be enjoyed with ease because of Adreno 205 GPU (Graphics Processing Unit).

It has a Clear Black display made of Corning Gorilla Glass. 3.7-inch Multi-touch capacitive touch screen moves with a single flick. It is very responsive. Nokia Lumia 710 has an internal storage of 8 GB and a 512 MB RAM but does not support an external memory card slot.

Front camera of 5 MP can record video at 720p@30fps and comes with a LED flash. Auto focus Geo-tagging, face detection and image stabilization are the other features that it boasts of.

Proximity sensor, ambient light sensor, 3-axis accelerometer, digital compass and G-Sensor are the sensors that Nokia Lumia 710 is packed with. It also has A-GPS facility. It has a Bluetooth v2.1 and Wi-Fi 802.11b/g/n connectivity. The output port includes a micro-USB and a 3.5mm audio jack.

1300mAh Li-ion battery provides Nokia Lumia 710 a good battery back up giving it a stand by of around 400 hrs and a talk time of around 7 hrs.

Though this glossy phone is available in European and American market, it will see the light in Asian market only in December.