Everything you need to know about Bhutan: news, reviews, in-depth analysis, opinion and more

The Himalayan Kingdom of Bhutan with capital at Thimpu is nestled between India and China and has many beautiful Buddhist Monasteries and Dzongs like the Taktshang monastery. Early Bhutanese had migrated from Tibet and some evidence prove its existence since 2000B.C. Britishers had attempted to control the country’s affairs, however, it could not colonize it until in late 1950’s as it was almost detached from the rest of the world. However, its people carried on their agricultural activities and retained their traditional values, which are preserved till date. Since 1907, Bhutan has been a monarchy ruled by the Wangchuk dynasty but in 2007 it became a Parliamentary democracy with King as the Constitutional Monarch.

Geography and Climate of Bhutan:
Bhutan is referred as ‘Switzerland of Asia’ in context to its shape, area and mountainous location. This inland country, being landlocked by other countries has no access to sea. But Bhutan has considerable Hydropower potential and is exporting its surplus power to India. The southern part of the country is characterized by tropical plains and is largely arable, which constitutes only two percent of the agricultural land. Thimpu, its capital lies in the highlands, which is most populous part of the country.

Extreme weather in the mountains and humid temperatures in the coastal plains characterize the climate of Bhutan. The temperatures vary according to different terrains in the area. Generally, winters are cold, summers are hot and the occurrence of landslides becomes evident during the rainy season.

Culture and Cuisine of Bhutan:
Bhutanese people are known for having a rich cultural heritage, which has been handed down from the centuries. The Buddhist monasteries located here depict the ancient and spiritual aspect that conveys the pious teachings of Buddha. Besides this, this country boasts of having an egalitarian society where women have the right to land ownership and also typically an “anchor mother” heads a Bhutanese family.

Bhutan is a unique country in that it measures the country’s development in terms of Gross National Happiness instead of the regular GDP.

Bhutanese people celebrate Tshechus festival, which is held in honor of Guru Rimpochey, and usually almost all the local villagers participate in it along with innumerable tourists. Apart from this, music also forms a predominant part in their lives. Drukpa music is the popular one amongst the native music, which includes zhungdra, boedra and rigsar.

A typical Bhutanese dish consists of chicken, yak meat, dried beef, pork, pork fat, mutton and rice. They love spicy food and thereby the dishes include a varied range of spices such as chilli, cardamom, ginger, garlic, turmeric and caraway. A vegetarian dish ‘Ema Datshi’ is also popular. Besides this, the popular beverages include butter tea, brewed rice wine and beer.

Tourism in Bhutan:
Bhutan offers a plethora of tourist sites. However, it is in late 20th century only, the Bhutanese government has allowed an access to the tourists, as it wanted to preserve its unique culture. Some of the major sites are Thimpu and Paro valley that attract tourists from worldwide. Paro is the most modernized city of Bhutan and yet it retains the historical relics of the past.

Other Tourist Attractions in Bhutan include: 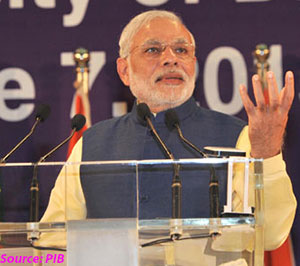 The Prime Minister, Shri Narendra Modi, today said that even as his 2-day visit to Bangladesh was ending, he felt the real journey begins now.

New Delhi, May 2 (IANS) Finance Minister Pranab Mukherjee is scheduled to visit Manila this week to attend the annual board of governors' meet of Asian Development Bank (ADB).

New Delhi, May 2 (IANS) SAARC countries Wednesday adopted a charter for mutual cooperation and set up a forum that will enhance capabilities to conduct free and fair elections.

Itanagar, May 2 (ANI): The Indian Army's 1st Arunachal Scouts battalion, two years after its formation, has taken charge of providing security to the unmanned, inhospitable and porous international border in the land-locked Himalayan state.

Guwahati, April 30 (IANS) Troops from the Red Horns division of the Indian Army, based in Udalguri district of lower Assam, have arrested four hardcore cadres of the anti-talks faction of the National Democratic Front of Bodoland (NDFB) from a remote location on the Indo-Bhutan border in the district, an official said Monday.

New Delhi, April 27 (IANS) The Election Commission of India will host the third Conference of Heads of Election Management Bodies of SAARC Countries from April 30 to May 2 here.

New Delhi, Apr 26 (ANI): Minister of State for Personnel, Public Grievances and Pensions, V. Naraynasamy, on Thursday exhorted the young IAS probationers to be agents of Change at grassroots level.

New Delhi, April 25 (IANS) A three-day confluence of narratives, ideas, literary expositions and cultural showcases from India and Bhutan will strengthen the growing South Asian cultural solidarity in the Himalayan kingdom next month.

Tibetans to get five-year registration certificates

Dharamsala, April 22 (IANS) Tibetans born in India and those living in the country for more than 20 years can now get the registration certificates essential for their stay renewed after every five years, a Tibetan official said Sunday.

New Delhi, April 16 (IANS) Concerned about the growing Maoist movement in Assam, Chief Minister Tarun Gogoi said Monday that the central government should include the state in the framework of development and security schemes that constitute the strategy against left-wing extremism.

New Delhi, Mar 31(ANI): An Indian Supreme Court order directing the government to link over 30 rivers and divert waters to parched areas has sparked off concerns in neighbouring countries.

Guwahati, April 7 (IANS) Security forces in Assam arrested four persons and recovered a crude bomb Saturday on the anniversary of the raising day of the banned United Liberation Front of Asom (ULFA).

Telecom links in all Indian villages by 2014: BSNL

Agartala, March 25 (IANS) State-owned Bharat Sanchar Nigam Limited (BSNL) has undertaken an ambitious Rs.20,000 crore project to establish telecom links in all villages across India and to take e-governance to rural and far-flung areas in the next two years, a BSNL official said here Sunday.

Itanagar, Feb 19 (ANI): In a historic step to strengthen bilateral ties between Bhutan and Arunachal Pradesh, a delegation from Bhutan headed by Chairman Dupthop today agreed to work towards enhancing tourist inflow through mutual cooperation.

Itanagar, Feb 16 (ANI): Gross National Happiness (GNH) or happiness interwoven with balanced economic development was a concept introduced by Bhutan's King in 1972, as an alternative to Gross Domestic Product (GDP), said Bhutan's National Assembly member Dupthob at the start of four-day visit to Arunachal Pradesh as the leader of a five-member team.

New Delhi, Feb 9 (ANI): A meeting of high-level group of eminent experts from the South Asian Association for Regional Cooperation (SAARC) countries to strengthen the anti-terror mechanism got underway here on Thursday.