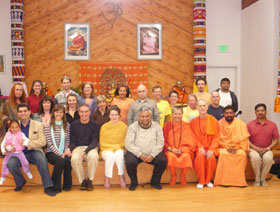 Relevance of yoga, traces of which date back to Indus Valley Civilization around 2,000 BCE, in the modern world was explored when Swami Sitaramananda, internationally respected yoga virtuoso; and Rajan Zed, acclaimed Hindu statesman; met at Grass Valley in California (USA).

Other topics discussed were spiritual dimension of yoga, realization through Vedanta, maya (universal illusion) and True Reality, manaskara (mind-work), realization of Self, future of yoga, etc.

Zed pointed out that yoga would continue to live and grow, as it was the reservoir of something basic in the human spirit and soul.

Swami Sitaramananda, director of renowned Sivananda Ashram Yoga Farm in California, is an international ambassador of yoga, who has taught and spread yoga world over for the last about 25 years. She is an ordained sannyasin of the Saraswati classical monastic order of India and has written books on spiritual poetry and yoga.

Rajan Zed is an acclaimed Hindu statesman who is president of Universal Society of Hinduism. He is one of the panelists for “On Faith”, a prestigious interactive conversation on religion produced jointly by Newsweek and washingtonpost.com. He is very active in interfaith dialogue and has been bestowed with “World Interfaith Leader Award”.

Details of the pictures attached: Rajan Zed (fifth from left) at Sivananda Ashram with Swami Sitaramananda (sixth from left), Ashram volunteers and others.