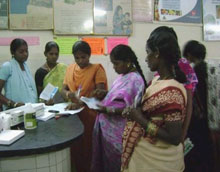 Prevalence of diabetes is increasing globally and this includes pregnant women with gestational diabetes mellitus (GDM). GDM is defined as a transient abnormality of carbohydrate/ glucose intolerance of variable intensity - a condition in which women without previously diagnosed diabetes exhibit high blood glucose levels during pregnancy. Women with this condition are at an increased risk of diabetes in future, as are their children and the following subsequent generations.

Thus an important public health priority in the prevention of diabetes is to address maternal health during ante and post partum period. Primary prevention will most likely reverse or halt the trend of increasing diabetes cases. Keeping this in mind, the World Diabetes Foundation (WDF) has been funding the project Diabetes in Pregnancy - Awareness and Prevention (DIPAP), run by diabetologists at Dr V Seshiah’s Diabetes Care and Research Institute at Chennai, working with the Tamil Nadu government in India.

There is no current national data regarding GDM. But on the basis of a community based study carried out in the Government Maternity Hospital, Chennai, it was found that the prevalence of GDM in urban, semi urban and rural areas was 17.8%, 13.8% and 9.9% respectively. Greater incidence in urban areas could be attributed to a more mechanized and sedentary life style coupled with increased maternal age.

The morning of 27th November 2008 was bleak indeed, what with the terrorists indulging in inhuman and senseless killings in Mumbai and cyclone Nisha playing havoc with normal life in Chennai. But somehow we managed to reach the government hospital of Chennai Municipal Corporation at Saidapet. This is one of the several hospitals where the DIPAP project has been running successfully since 2004.

It really lifted my low spirits to see about 20 women who had braved the inclement weather to be there for screening/ follow up action for GDM. The two lab technicians, Vimala and Radhi, appointed by the project managers, were busy taking the blood samples for glucose monitoring.

Uma Bhaskar, a 29 year old mother of two kids was all praises for the project team. She was a high risk patient due to her obesity and was diagnosed with GDM during her first pregnancy, 4 years ago in a private clinic. But did not follow it up, till she came to this hospital two years ago during her 2nd pregnancy. She had to be administered insulin during pregnancy and is still on oral medication, along with diet control. She comes for regular checkups and feels that likes of her have benefited immensely from this programme.

21 year old Gayatri, mother of a one year old daughter, travels 21 km. to reach this hospital. She was referred to this hospital for an ultra sound scan and diagnosed with GDM during routine screening. However, she was able to control her condition through diet control and regular walking, and did not require medication. She remarked with a grin that now she was eating less sweets and felt better equipped to manage her condition, thanks to DIPAP.

Dr Madhuri Balaji, who is closely associated with this project, spoke of the main problems faced during implementation of the project:

(i) lack of awareness in pregnant women about GDM;

(ii) failure of the women to follow up with subsequent check ups (the first checkup should be done around 12 weeks of gestation, with follow up screenings during 24th and 30th weeks). This may happen due to relocation of the woman to her mother’s house for delivering her first child, as is customary. Or, if it is her second pregnancy, then she cannot afford the long wait at the hospital with a small child in tow;

(iii) diet and other controls may not be followed once the pregnancy period is over. The woman has other things to care about now and her well being comes last in the family.

The medical officer in charge of this hospital Dr Shanthi Viveka, was all praises was this laudable effort of WDF, as were the other nursing staff. They felt that the project has benefited everyone. But they were a little wary as to what would happen once WDF disassociated itself with the project. She cited shortage of hospital staff as well as poor infrastructure, as possible impediments in continuing with the mandatory screening of pregnant women all over the state.

WDF has thus successfully implemented a system which screens and controls gestational diabetes. It has been able to initiate a change in health policies in the region to the extent that it has now become mandatory to screen all pregnant women for GDM in Tamilnadu. But it remains to be seen how well the government will implement it through its own resources all over the state. Also,this example is worth emulating in other parts of the country too.

The author teaches Physics at India's Loreto Convent and has been writing extensively in English and Hindi media. She serves as Editor of Citizen News Service (CNS).