The Politics of Big Capital and the Poor in Narmada Valley 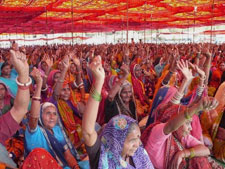 On the 5th of November I was in Khandwa, a town in central India, taking part in a rally organized by the Narmada Bachao Andolan (NBA), or Save the Narmada Movement. About 20,000 rural people, mostly landless farm labourers or small-medium farmers, many of them tribals, had traveled 50 to 400 km on tractors, trucks and buses to participate in the rally, all at their own expense. Every family carried a packet of food cooked at home to last for a day or two. The women with babies carried them along as well.

The day long rally and mass gathering looked like a sea of people - women in colourful saris and men in white dhoti-kurta - united by common peril and anger. The peril of them and their children becoming pauperized. The anger at being taken for a ride. These people represented more than 100,000 families, or over half a million citizens, who have been displaced because their original villages and lands are either submerged or about to be submerged by the reservoirs of six big dams built on the river Narmada. The dams are Indira Sagar, Onkareshwar, Maheshwar, Maan, Upper Veda, and Bargi. The people in the rally narrated their woes and demanded land for the lost land that is guaranteed by the government's own resettlement and rehabilitation (R&R) policy but denied to them.

The experience of these people from the Narmada valley is the story of how the poor always get a raw deal by the politics of the market driven economic paradigm. It is the story of how inequality and poverty are reinforced by the current system. Broad contours of this story are the same all over the globe wherever the profit and growth objectives of big money come in conflict with the basic livelihood rights of the economically weak - landless labourers, small farmers and artisans in villages, tribals in forests, fishing communities in coastal regions, and city based vendors and workers living in slums and other low income areas.

Here is what has happened to the people in the Narmada valley. Some time back a team of five persons from academic institutes, including myself, carried out an independent survey of 429 families displaced due to Indira Sagar dam, to understand how their living conditions have changed after displacement. At the time of the survey these families had been already displaced for 3-5 years and living either privately or on government resettlement sites. We visited eleven such sites. Most of resettlement sites lacked basic amenities like access to markets and employment opportunities, proximity to affordable and cultivable land, trees, clean water, grazing land for cattle, and drainage.

Although no family received any land as mandated by the R&R policy, the government provided them some cash compensation against the fixed property lost in submergence. This compensation was grossly insufficient to help families make productive investments. We did not find a single family that could rebuild its lost livelihood even after 3-5 years of displacement. Most farmers lost substantial farmland to submergence but could purchase at best a small fraction as the cash compensation for land was much below the market rate. Small farmers became either landless labourers or more dependent on farm labour work to supplement insufficient income from farming. The landless farm labourers were pushed further to the brink of precarious survival. Their income fell sharply and became more uncertain as both farm labour demand and wage rates were squeezed in the areas in the vicinity of submergence.

As economic hardship deepened and common grazing land was no longer available, almost all families were forced to sell all or part of their cattle. Several children were withdrawn from schools. Health problems like physical illness and psychological depression had increased. With earning opportunities shrinking locally, seasonal migrations had become common and some families were contemplating longer-term migration. The irony was that people were not sure which would be a good place to migrate and whether their economic condition would improve after that. In retrospect, almost everyone we met felt they should have been given land for land.

When people, whose main skill base is in agriculture and local resources, are suddenly uprooted, there are only two ways to rebuild lost livelihoods. Either they get back good quality agricultural assets (i.e. cultivable lands along with support systems) and other natural resources which they can harness with the skill and knowledge they already possess. Or they are provided with alternate productive assets with potentially attractive markets and granted sufficient material support and cushion of time to acquire new skill base required to operate new assets economically, source new inputs, market new outputs, and begin lives afresh.

The people who came for the NBA rally were the ones for whom sparing a day from farm work and traveling up to Khandwa was not easily affordable. But they came because they are convinced that the only hope to gain their right is to come together and make their voices heard. They also have faith in NBA activists like Chittaroopa Palit, Alok Agarwal and others who have stood behind them like a rock and have patiently pursued countless court cases on their behalf.

Though justice has been repeatedly repudiated, persistent struggle has also brought some successes like the recent High Court judgment that land for land with a minimum of 2 hectare be allotted to each displaced family. However, the State Government, as always, wants to reject this demand and has challenged it in the Supreme Court. So yet another tiresome phase of court hearings lies ahead. Every flicker of hope has been followed by long spell of despair. The disciplined march and gathering of 20,000 people, all carrying in their heart such memories of years of frustration and struggle, yet displaying remarkable resolve and calmness, resonated in such a way that it felt like emanating spiritual energy of 20,000 individuals meditating together.

A friend of mine who was shocked at listening to this story, asked, "How could the Government subject half a million citizens to such cruelty?" The answer is: our political structures are not democratic enough to empower the ordinary people. On the contrary, such people are constantly denied their right to livelihood when they come in the way of commercial projects that demand large scale acquisition of land, water, minerals, forests and other natural resources. The state has almost always sided with the big business. This is how the free capital driven markets work. They strip the poor of whatever capital they have and pass it to those who are already overloaded with it. In case of Narmada dams, for instance, the State Government has granted several concessions to the corporations owning the dams. As for the displaced families, it says there is no land available in the state. At the same time it has doled out more than 100,000 acres for biodiesel crop plantations and thousands of acres for industrial parks and special economic zones.

Interestingly, the GDP of the nation may often rise in the process as most of lost wealth of the poor was not accounted in the formal markets whereas most of new wealth acquired by the rich is. Hence the process of pauperization of the poor does not raise hackles of those policy makers, economists and intellectuals who are worried mainly about economic growth and capital investments. It also does not bother many politicians as their funds come from supporting the rich and votes from dividing the vulnerable poor. Thus the poor like those living in the Narmada valley remain perpetually caught in a recessionary spiral. The recent global financial recession is no news to them.

So, what can be done when years of chasing court cases and appealing to the governments have not yielded much? The only non-violent way is for the people to reorganize with greater vigour and numbers and make the system accountable. The people's movements like the NBA do not oppose industrialization. They oppose the process that unilaterally takes away resources from the displaced communities and makes their living conditions worse, and channels most of the benefits of industrial projects to the affluent. As an alternative, they demand a much more democratic way of deciding who will give up what resources, how the displaced will be rehabilitated, and how the benefits of projects will be shared.

The author is a former faculty member of Indian Institute of Technology (IIT) Bombay and Indian Institute of Management (IIM) Lucknow, and is currently a member of a start up venture that develops mathematical models for planning and policy analysis. His areas of interest include mathematical modeling, biological evolution, physics, development and environment, sustainable economics and industry, and social change. He can be contacted at rahulanjula@gmail.com