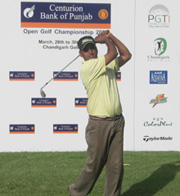 Veteran golfer Mukesh Kumar held his nerve at the crucial juncture to seal the inaugural Centurion Bank of Punjab Open Golf Championship after beating Gaganjeet Bhullar in an exciting finale on the first playoff hole by exhibiting all his experience at the Chandigarh Golf Club here on Sunday.

Mukesh and Gaganjeet were involved in a decisive playoff for the title as both of them finished at the top of the leaderboard with an identical total of fourteen under 274 after 72 holes. Mukesh converted a 12 feet putt on the first playoff hole to finish off in style. Manav Jaini finished third with a total of six under 282.

Mukesh thus continued his ream run in the current 2007-08 PGTI season as he pocketed his third title. He had earlier won the IOC Xtra Premium Masters in November 2007 and the Tata Open in January 2008.

This triumph was also Mukesh’s fourth at the Chandigarh Golf Club and overall his 101st in professional golf. The Mhow-based professional has now climbed from fourth to third on the current PGTI Order of Merit.

Mukesh shot rounds of 67, 69, 68 and 70 to total fourteen under 274 for the week. Mukesh started the final day with a five-stroke lead over his nearest rival Gaganjeet Bhullar. The 42-year old veteran had a jittery start on Sunday when he bogeyed the first two holes.

But he soon amended his mistakes and then picked up birdies on the third, fifth and sixth. Mukesh made the turn at level par after dropping a bogey on the eighth. The professional from Mhow then played a solid back nine by making seven pars and two birdies (13th and 18th).

The overnight leader almost had a title slip-up as Bhullar closed upon him on the 16th and then took a one-stroke lead on the 17th. But Mukesh struck back with a fine birdie on the 18th to be tied with Bhullar.

The match then went to a playoff and Mukesh edged out Bhullar on the first playoff hole by making a 12 feet putt for birdie. Bhullar on the other hand landed his approach shot over the green and then could not chip-in for a birdie.

“I feel great about this win because I felt I had almost lost the title at one stage. I think it was my experience that paid-off at the end. Gaganjeet played some outstanding golf to give me a very tough fight. He has a great future and will only get better with experience,” said elated Mukesh after clinching his third victory of the season.

“This is turning out to be a great year for me because there is a lot of improvement in all aspects of my game. The last time I played so well was way back in 1993-94 when I won 11 titles out of 20 in the season,” Mukesh added.

“I feel I still have five years of top class golf left in me and this victory has bolstered my confidence.”

Gaganjeet Bhullar (69, 69, 71, 65) was really unlucky to miss out his first professional win despite firing 65 to equal the course record of the Chandigarh Golf Club on Sunday.

Bhullar began his fourth round with a bogey on the first hole. He then closed the gap between himself and Mukesh by playing some incredible golf by sinking birdies on the fourth, fifth, ninth, 12th, 13th, 15th, 16th and 17th.

The 19-year-old from Kapurthala who came close to win a pro title on a few occasions earlier, said, “I thought I played really well but I am disappointed to miss out on the title. At the start of this tournament I felt it was the perfect setting for me to register a win because the course was not playing too long. But I lost out to a very experienced player at the end.”

“I was very confident heading into the final round and played aggressively to close a huge gap of five strokes between myself and Mukesh. This performance will help me grow as a player,” Bhullar added,