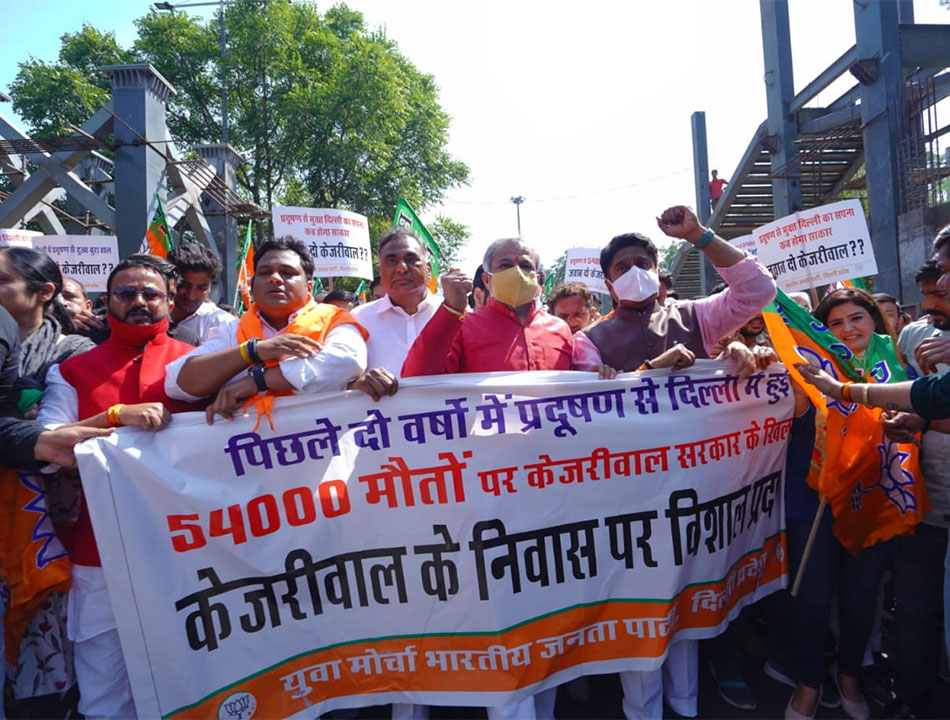 New Delhi, 2 March.  Alarmed at the worsening pollution level in the capital, a large number of the Delhi Bharatiya Janata Party workers led by its president, Sh Adesh Gupta, on Tuesday staged a demonstration near the chief minister Arvind Kejriwal’s residence to protest against his government’s indifferent attitude towards tackling this burning issue.

Addressing the protestors who were carrying placards and rent the air with slogans of ‘Kejriwal shame, shame’ , Sh Gupta  said despite repeated promises to clean the river Yamuna and make it the Thames of London, the fact is it has only got more polluted with  over 4400 million liters of polluted water  falling into the river. In fact, cases of lung cancer, asthma and other air-borne diseases are only on the rise due to pollution, he added. Present among others on the occasion were leader of Opposition, Sh  Ramvir Singh Bidhuri,  general secretary, Sh Kuljeet Singh Chahal, vice president, Sh Rajiv Babbar, yuva  morcha chief Sh Vasu Rukhar and Poorvanchal morcha president Sh Kaushal Mishra.

The BJP president said  though the Kejriwal government in the last four years collected an amount of Rs 883 crore from people of Delhi in the name of green cess, it has spent only 1.6 per cent of it on controlling pollution whose level has now gone alarming with no concrete steps to check and contain it.

He said the Kejriwal government is only busy in falsehood and propaganda without doing any actual work on the ground level and rather, it was stalling all developmental activities in the city due to which not only pollution level but overall situation is worsening.

Talking about the Green budget of the Kejriwal government, Sh Gupta said though on stubble burning, he made a lot of hue and cry, but figures show last year the government spent only Rs 40000 in buying bio decomposer units while Rs 24 lac was spent on their distribution and another whopping Rs 9 crore on its publicity but a mere 300 farmers benefited from it. The fact is 24 promises were made in Green budget including planting of 6 crore trees, new electric buses, and smog towers, but nothing has materialized, he charged.

Extensively quoting from an NGO’s Greenpeace Southeast Asia report, he said 54000 people died of pollution-related diseases in the capital last year alone or a daily average of 148 deaths and asked who is responsible for this. But Kejriwalji seems to be least bothered, he charged. Sh Gupta said during the course of his party’s drive to expose corruption cases involving Kejriwal government, its workers travelled by metro trains covering all its stations in Delhi yesterday and met large number of commuters and told them about these scams and “we will continue to do so to expose the misdeeds of this Kejriwal government till it came clean on all charges”.