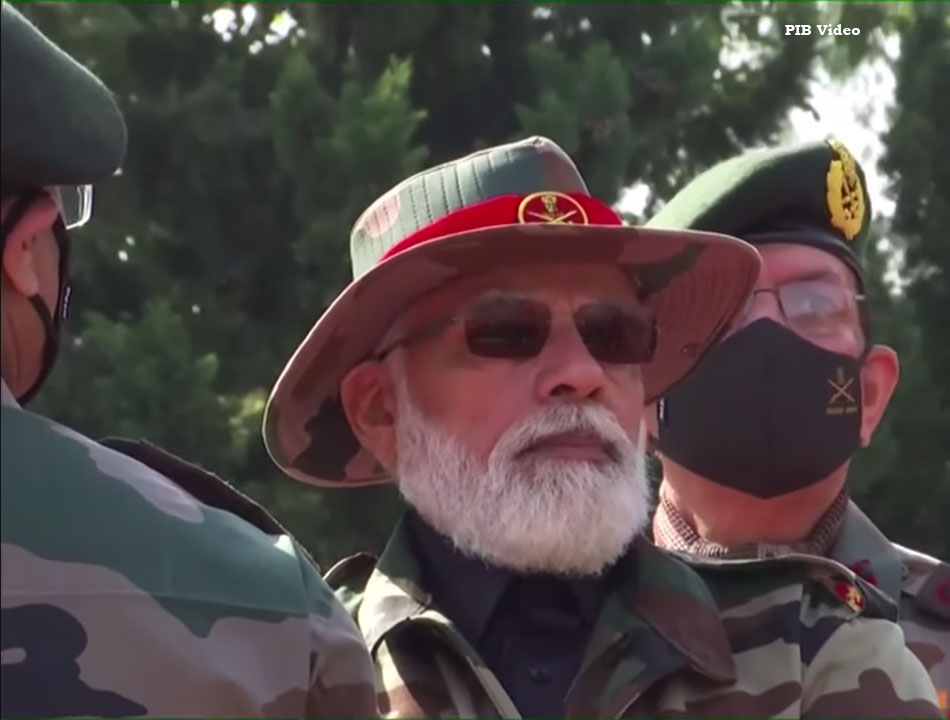 “Today’s India, in the ‘Amrit Kaal’ of the freedom is alert about its capabilities and resources”

“Connectivity in border areas from Ladakh to Arunachal Pradesh, from Jaisalmer to Andaman Nicobar has been established with modern infrastructure, leading to unprecedent improvement in the infrastructure and convenience for soldiers”

“We don’t perceive the nation as government, power or empire, for us, it is living, present soul, defending this is not limited to defending just the geographical boundaries. For us national defence means defending national vibrancy, national unity, and national integration.”

Like all his previous years in the constitutional position, the Prime Minister, Shri Narendra Modi celebrated Diwali with armed forces, this year also. He visited Indian Armed Forces in Nowshera district in J&K today.

Addressing the soldier, the Prime Minister said that spending Diwali with the Armed Forces, for him, is in the same spirit as to celebrate Diwali with his family. He said, that  is why, he has spent all his Diwali with the armed forces at the border after assuming constitutional post. He said he has not come alone but has brought with him with the wishes of the 130 crore Indians. He said today evening, every Indian will light one ‘diya’ to convey his or her wishes for the brave soldiers of the country. The Prime Minister said to the soldiers that they are living security shield of the country. Serving the country as being done by the brave sons and daughters of the country, is a good fortune that is not available to everyone, he said.

From Nowshera, Shri Modi greeted the countrymen for Diwali and other upcoming festivals such as Goverdhan Puja, Bhaiyya DoojChatth. He also wished Gujarati people for their new year.

He said Nowshera’s history celebrates the bravery of India and its present is the embodiment of the bravery and determination of the soldiers. The region has stood strongly against the aggressor and encroachers. Shri Modi paid rich tribute to the heroes of Nowshera, Brig. Usman and Naik Jadunath Singh who made the supreme sacrifice for defending the motherland. He saluted  Lt. R R Rane and other bravehearts who set unprecedented examples of valour and patriotism. The Prime Minister also described his feelings for taking blessings of Shri Baldev Singh and Shri Basant Singh who supported armed forces steadfastly. He also praised the Brigade stationed there for their role in the surgical strike. He recalled the moment of relief when all the brave soldiers returned safely from the strike.

The Prime Minister said that the responsibility of protecting the freedom of the county vests with everyone and today’s India, in the Amrit Kaal of the freedom is alert about its capabilities and resources. He also talked about the growing Aatmnirbharta in defence resources as opposed to earlier period of dependence on the foreign countries. He said 65 per cent of the Defence Budget  is being used inside the country. A list of 200 products, a positive list, that will be procured only indigenously has been prepared. The list is going to be expanded soon, he said.  He also talked of the 7 new Defence companies launched on Vijaya Dashmi as the old ordnance factories will now make specialized sector specific equipment and ammunition. Defence Corridors are also coming up . India’s youth is involved in vibrant defence related start ups.  All this will strengthen India’s position as defence exporter, he said.

The Prime Minister emphasized that Indian Military power need to be expanded and transformed according to the changing needs. He said fast changing technology landscape has demanded new changes, that is why it is critical to ensure coordination in the integrated Military leadership. CDS and Department of Military Affairs are steps in that direction. Similarly, modern border infrastructure will enhance the country’s military muscle, he said. He remarked that  connectivity in border areas from Ladakh to Arunachal Pradesh, from Jaisalmer to Andaman Nicobar has been established with modern infrastructure, leading to unprecedent improvement in the infrastructure and convenience for soldiers.

The Prime Minister expressed happiness that the participation of women in the country’s defence is touching new heights. After being deployed on the frontlines in Navy and Air Force, now women’s role is being expanded in Army also. Along with opening up of the Permanent Commission, NDA, National Military School, National Indian Military College for women, the Prime Minister mentioned his Independence Day announcement of opening up Sainik Schools for the girls.

The Prime Minister said that in the armed forces, he not only sees boundless capabilities but also unwavering service spirit, strong determination and incomparable sensitivity. This makes Indian armed forces, unique among the armed forces of the world. Indian Armed forces are as professional as the top armed forces of the world but its human values make it distinct and extraordinary, the Prime Minister said.  “For you, this not just a job for salary, for you this is a calling and worship, a worship in which you channel the spirit of 130 crore people” the Prime Minister said. He continued, “empires come and go but India was eternal thousands of years ago and remains so today and will remain eternal after thousands of years later. We don’t perceive the nation as government, power or empire, for us, it is living, present soul, defending this is not limited to defending just the geographical boundaries. For us national defence means defending this living national vibrancy, national unity, and national integration.”

The Prime Minister concluded “if our armed forces are blessed with sky touching valour, their hearts are ocean of human kindness also, that is why our armed forces not only defend the borders but are also always ready to help during calamity and natural disasters. It has grown as a strong trust in the heart of every Indian. You are the custodians and defenders of India’s unity and integrity and the emotion of Ek Bharat Shreshtha Bharat. I am fully confident that with the inspiration of your bravery, we will take India to the zenith of growth and progress.”