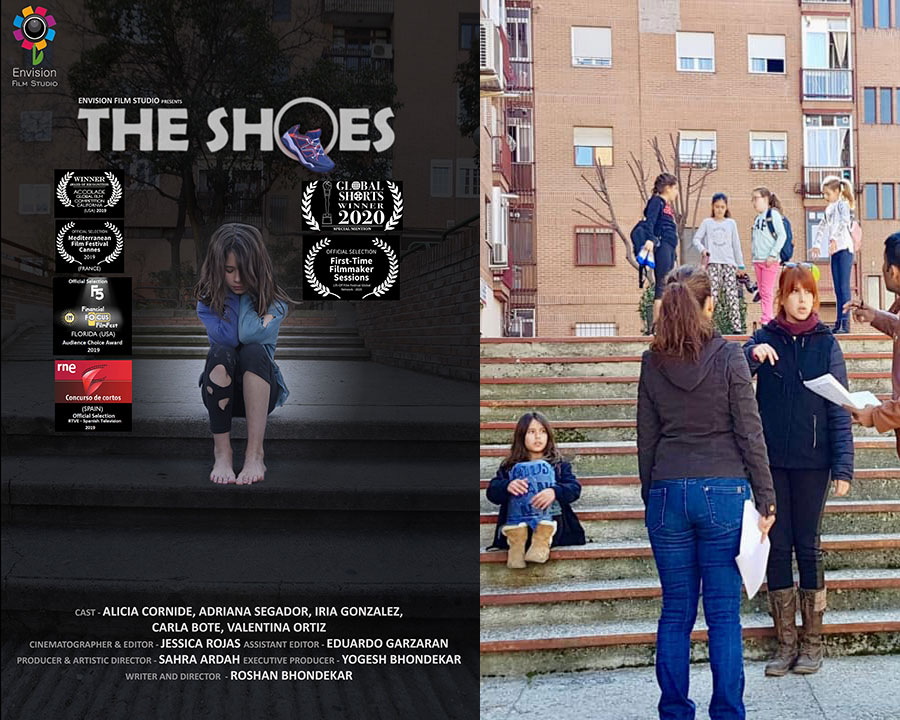 After winning award at the International Film competition in San Diego (California) for recognition for Liberation/ Social Justice/Protest and also getting an official Selection in F5: FPP Financial Focus FilmFest, Florida - the United States for Audience Choice Award, Roshan Bhondekar's The Shoes bags another milestone.

The short film written and directed by Indian-born Spanish filmmaker Roshan Bhondekar has won special mentions award from the 'Global Shorts' Film Competition in Los Angeles on 26th April 2020. The Shoes is an exciting short film, which is based on Global social issues like child education and poverty. The story line, which talks about - A child is searching for happiness in her life, while looking at other children around the street, even the child have equal rights to wear clothes, eat food and have shelter, played key role by child actors from Spain - Alicia Cornide, Valentina Ortiz, Iria Gonzalez, Carla Bote, Adriana Segador, Produced by Sahra Ardah from Spain and Yogesh Bhondekar an Executive producer from India.

Talking about the same, Roshan Bhondekar shares, "We never thought that our small efforts towards film making while addressing social issues will give us international awards, as on today we have received 6 international awards for ‘The Shoes’ alone. The special feeling when audiences from different parts of the world are appreciating our ideas, we will keep doing best for bringing the best talent and ideas on the screen. Honored to be participated along with powerful Hollywood projects. We have to dedicate this award to Mr. Rishi Kapoor and Mr.Irfan Khan for their remarkable contribution for Indian Cinema, as they have shown the way of quality film making.”

Jeff Hudgins who chairs 'Global Shorts' Film Competition, had this to say about the latest winners, "Global Shorts is a Los Angeles-based international awards competition that recognizes short films with a runtime of 50 minutes or less. It is a sister competition of One-Reeler, an IMDb-recognized short film competition that accepts films 12 minutes or less. Each of our competitions have separate categories, judges, and Awards packages. Attracting filmmakers from all over the world, our competitions emphasize original, impactful storytelling – the same qualities film festivals and distributors look for. Past competition Winners have also won or been nominated for: BAFTAs, British Independent Film Awards, Cannes Film Festival Awards, Emmys, Genie Awards, Golden Globes, Saturn Awards. Some of the countries we have received Winning submissions from include: Australia, Austria, Belgium, Canada, Czech Republic, Finland, France, Ireland, Italy, Japan, Malta, Netherlands, New Zealand, Philippines, Poland, Portugal, Spain, Sweden, UK, USA".

The man behind the short film, Roshan Bhondekar hails from a small town named Tumsar from Maharashtra, India. From a 300 sqft house with 6 people to a plush apartment in Spain, Roshan Bhondekar's journey has been inspiring and how! Shot completely in Spain, The Shoes is a story based on a child's right to have a dignified and secure life. The short film throws light on the global child education and poverty and going by the current coronavirus pandemic, it is essential to take the right measures to cope up with poverty and lack of child education, especially girl child education.

Being the eldest son coming from poor family background, it was tough for Roshan and his family as they had to struggle for a two-time meal and that's what kicked the author to do something big. Roshan managed to secure admission to a polytechnic college and later bought his own house after completing his engineering and ever since then there was no looking back for him.

The author has also written books like The Frame: An Art of Optimism and Love - The Key to Optimism: Path Towards Happiness. Roshan didn't resist himself to the limited film industry and he has written & published a couple of recognized books in association with Notion press, he is known for non-fiction book 'Love-The Key to Optimism, noticed by John C. Maxwell - New York Times bestselling author and mentioned in book 'No Limits'. He is actively writing for international journals like Thrive Global, and Medium. Also, his another short film Hausla Aur Raste, too won prestigious awards during International film festivals, one during the Delhi Shorts International Film Festival as 'Special Festival Mention', in India and another one as 'Best 1st Time Filmmaker' Award during Mediterranean Film Festival Cannes.

Hausla Aur Raste is a story of a girl from a lower-middle-class farmer's family who's able to chase her dreams of clearing Civil Services Exam and becoming an IAS officer despite the odds and limited resources, written and directed by Indian-born Spanish filmmaker Roshan Bhondekar from small-town from Maharashtra, Tumsar in association with Envision Film Studio production house has captivated a wide audience nationally and internationally. The film was shot in the surrounding villages of Nagpur.

In 2018, Hausla Aur Raste stood out in Delhi Shorts International Film Festival in India and bagged the award. "The competition was tough. All entries were superb. Each short film showcases timely and interesting stories that make a huge impact to wide audiences. It also shows the actor's amazing talents and the skills of the production team, this Project officially selected in more than 8 film festivals" Roshan Bhondekar said. After getting the award in Delhi, Hausla Aur Raste won 'Best 1st Time Filmmaker' Award in Mediterranean Film Festival Cannes 2018, France and was nominated in the "Best Debut Filmmaker" category in the Calcutta International Cult Film Festival 2018. 'Being Best 1st Time Filmmaker for the award is a big blessing already, reaching the international scene was a huge recognition. We will remain dedicated to producing unique and quality films in the coming years', Bhondekar further added.

In winning a Best 1st time filmmaker, Roshan Bhondekar joins the ranks of other high-profile winners of this internationally respected award including the very talented Jensen Noen of 'The Perception' for his best feature film.

Roshan is a well known motivational speaker who got inspired by his parents who taught him to help others grow better. In addition, Roshan was also the Vice President of Hope India NGO back in 2017 where his prime responsibilities were to drive the initiatives for Skill Development, women empowerment, human rights, and education & literacy, etc. at the national level.