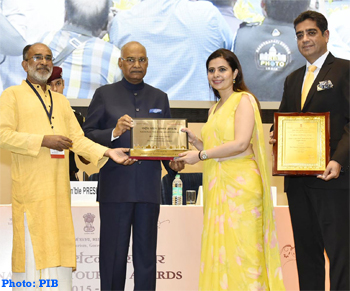 Speaking on the occasion, the President said that tourism is one of the largest industries in the world. Its evolution can be estimated from the fact that the number of tourists all over the world has increased from 2.5 crore in 1950 to 123 crore in 2016. The tourism industry contributes 10.2 percent of the world's GDP. It is estimated that every 10th person in the world works in the tourism industry.

The President said that in India too the livelihood of a very large number of people is linked to the tourism industry. In the year 2016, tourism’s contribution to GDP was 9.6 percent and 9.3 percent to total employment. The tourism industry can contribute significantly in generating permanent employment opportunities and eliminating poverty. According to an assessment, an investment of Rs. 10 lakh in tourism industry provides employment to about 90 people, while about 45 in agriculture, and about 13 people in manufacturing.

The President said that inclusive tourism development can strengthen inclusive economic development. Every citizen should strive to provide a good experience to tourists at his or her own level. In a tourism conscious society, the role of the government is only to provide direction and a facilitating environment.

The President said that 'Adopt a Heritage Project' which was launched today, with the efforts of the Tourism Ministry, Culture Ministry and Archaeological Survey of India, has great potential to make our rich and diverse heritage monuments, tourist-friendly. He expressed hope that this project will help in the maintenance of our heritage with a partnership of the public and private sectors.