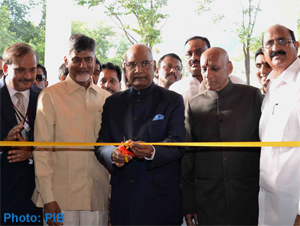 The President of India, Ram Nath Kovind addressed a civic reception hosted for him at SV Arts College Ground, Tirupati today (September 1, 2017). He also laid the foundation stone for BR Ambedkar Skill Training Academy and gave sanction letters to beneficiaries of the Stand up India initiative and the Land Purchase Scheme of the Andhra Pradesh Scheduled Castes Co-operative Finance Corporation.

Speaking on the occasion, the President said that the people and history of Andhra Pradesh are a pride for every one of us in India. This is a land of great heroes and great achievements. From the Satavahana Empire of ancient times to the leadership of people like T. Prakasam, whom we remember with reverence as “Andhra Kesari”, this region has given the country so much. In recent times, Andhra Pradesh has been fortunate to have given birth to at least two far-sighted political leaders – the late Chief Minister Shri N.T. Rama Rao and our former Prime Minister, Shri P.V. Narasimha Rao. Andhra Pradesh’s social and economic achievements in the past few years mirror the transformation of India. Yet, as we march forward, we must ensure that this is a journey for all – and not just a journey for some.

The President said that the Ambedkar Skills and Training Academy is planned as a modern marvel in Tirupati - a world-class job-oriented centre that will focus on youth from marginalised communities. It will train them in skills that will help them get employment in government and private organisations.

The President said that Stand-Up India is a very important initiative – because it provides poor people the chance to become job creators. In Andhra Pradesh, entrepreneurship is in the DNA of society. This is the energy of youth that Stand-up India seeks to channel.

The President said that the Land Purchase Scheme of the Andhra Pradesh Scheduled Castes Co-operative Finance Corporation provides agricultural land to women members of traditionally marginalised communities. It boosts the earning potential of women, and gives them a solid economic asset in the form of a land holding. It also empowers them socially and within the family.

Earlier in the day, the President visited the Sri Venkateswara Institute of Medical Sciences, within which is the Sri Padmavathi Medical College for Women and inaugurated a new hospital building.