Dr. Kalam was a creative leader who walked an unexplored path of developmental policies: Vice President 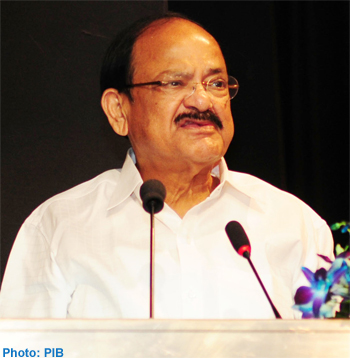 The Vice President of India, Shri M. Venkaiah Naidu has said that Dr. Kalam was a creative leader who walked an unexplored path of developmental policies. He was delivering the 2nd Dr. APJ Abdul Kalam Memorial Lecture, here yesterday.

Following is the text of Vice President's Lecture:

“Friends, today we have gathered here to remember and pay tributes to one of the iconic Presidents of India, the late Dr. A P J Abdul Kalam, who was not only the country's Missile Man, but the most popular "People's President".

Dr. Kalam was truly a human being extraordinaire. He epitomizes the teaching spelt out in a widely-quoted Hadees:

"If anyone travels on a road in search of knowledge, Allah will cause him to travel on one of the roads of Paradise."

Coming from a very humble background, he used to distribute newspapers as a child to supplement family income, relentlessly pursued education in the most difficult circumstances and became one of the leading space and missile scientists of India. And as all of us know, subsequently he became Rashtrapathi. A newspaper boy becoming President of India is the greatness of this country. The beauty of the democracy of India is that it made an ordinary person as President of India. That is the greatness of the Indian civilization, the greatness of the Indian culture. We have many examples. We have the Prime Minister, who comes from a humble background. He used to distribute tea in the Railway station, who became the Prime Minister of India. I am a son of a farmer. None in my family were in politics, not even highly educated also. I used to walk three km a day to go to school. Because of the greatness of our democratic system, I became the Vice President of India.

Religion is a way of worship. We should feel proud of our culture, heritage, the great civilization. Every religion is great and we have to follow the teaching and preaching of the religion.

Irrespective of the position he had held, Dr. Kalam always remained simple and treated everyone with the same love and affection - be it a high ranking dignitary or a low-ranking official. In fact, his affection was so infectious and spontaneous that he became the darling of children and youth. He used to get mobbed by students and children wherever he went—that indeed was the kind of popularity he had earned.

His vision was to see a transformed, fully developed India taking its place among the most developed nations of the world by 2020. He called it vision 2020.

Way back in the late nineties as Chairman of the Technology Information, Forecasting and Assessment Council, he was instrumental in the preparation of a major document called Technology Vision for India up to 2020.

Subsequently a book titled ‘2020—A Vision for the New Millennium' was co-authored by Dr. Kalam with Y S Rajan. In the preface to the book, the authors said: “We are aware of our systems of governance and social and political compulsions. We are fortunate to have gained experience in implementing projects involving people of various strata as beneficiaries, as well as projects entailing strong commercial pressures and those that are high profile, such as a satellite or a launch vehicle or missile project. The execution of these schemes provided varied experiences, which worked as base line knowledge for the shaping of this book.

Having taken these factors into account and after studying several vision reports of India and other countries, we still believe firmly that India can reach a developed country status by 2020. The Indian people can rise well above the present poverty and contribute more productively to their country because of their own improved health, education and self-esteem. India can have considerable technological strengths, so crucial for its strategic strengths and for economic and trade related strengths”.

Dr. Kalam's Vision-2020 envisaged India to be a nation where the urban-rural divide is reduced to a “thin line”; where there is equitable distribution of, and adequate access to energy and quality water; where agriculture, industry and the service sector work together in symphony; where education with a good value system is not denied to any meritorious candidate because of societal or economic discrimination, a nation which is the best for the most talented scholars, scientists and investors from around the world; a nation where the best healthcare is available to all; a nation where governance is responsive, transparent and corruption-free; where poverty has been totally eradicated, illiteracy removed, crime against women and children is absent and no one in the society feels alienated.

It further envisioned a prosperous, healthy secure nation devoid of terrorism. A peaceful and happy nation on a sustainable growth path and one of the best places to live in and is proud of its leadership.

Dr. Kalam belonged to that rare category of statesmen-like personalities, who bothered neither about pelf nor power and always occupied the high office with humility. He was a creative leader who walked an unexplored path of developmental policies. He took everyone associated with him and utilized their core competencies, intellect and creative minds from all disciplines to realize the vision.

He always used to say that the ignited minds of the youth were bubbling with the spirit of ‘I can do it' and the belief that ‘India will become a developed nation'. This feeling and spirit continue to inspire the youth of India, who always see Dr. Kalam as a motivator.

Only a fortnight ago, we celebrated the 70th anniversary of the country's Independence. Now we are celebrating 75 years of Quit India Movement.

Although, we can take reasonable pride in the progress made during the past seven decades in various fields from agriculture to science & technology, the questions that need to be asked is whether we could have done better? What is the real potential of India, have we tapped the full potential of India?

Focus should be on creating wealth, innovative, unleashing the force of growth. This is the area where the mindset of the people of the country has to be changed. Being constructive will be the befitting tribute we make to the great son of the soil, Dr. Abdul Kalam. The Parliament, the legislatures and other bodies also should function affectively, to get best out of every individual. And then have a collective determination to take the country forward and make good laws, good legislations.

Terrorism is a big menace to the society. Terror has no religion. Unfortunately some people are connecting terrorism to some religion, no religion supports terrorism. No religion preaches terror and no religion accepts terrorism.

These questions must trouble the conscience of every Indian, who wants to see a prosperous and thriving New India, where nothing but excellence should be the hallmark in every field - be it education, healthcare or governance. Yes, we can create an India envisaged by the Father of the Nation, Mahatma Gandhi, Dr. B.R. Ambedkar, Pandit Deendayal Upadhyay and Dr. APJ Abdul Kalam where nobody faces discrimination of any kind, where there is no urban-rural divide, where the farmer is prosperous, where women are respected and compete on equal terms with men in every sphere and where the last poor man in the line is uplifted. The person who is sitting last in the line should get his due.

Yes, this can be achieved when all Indians collectively and individually rise above narrow, selfish mentality and pledge to work with dedication and missionary zeal to banish poverty, corruption, illiteracy, communalism, regionalism and any kind of ism that will pull the country backwards. One of the major cankers posing a huge challenge to both, the government and the society, is corruption. This plague has to be completely eliminated. In the Holy Quran, Surah Al Baqara, 205 mentions that God does not like corruption.

Here, I would also like to point out that while the meaning of Islam is usually given to understand as “submission”, the word Islam in Arabic is derived from “salam”, which means peace. All religions preach peace and brotherhood, which are the two pre-requisites for the progress and development of any society or nation. Surah Al Ma'idah-48 says vie with each other in doing good deeds... so compete in righteousness. The spirit of that message should permeate every action of all individuals in building a Resurgent India.

India as an emerging economy cannot any longer brook delay in unleashing the energies of its young population and building a New and Resurgent India. With knowledge and technology driving the creation of wealth and accelerating the pace of development, the focus should be on research and innovation and firm linkages should be established between academia and industry.

At the same time, agriculture has to be made sustainable and profitable to the farmer to ensure food security. The Father of the Nation's dream of ‘Ramrajya' can be ushered only when there is ‘Gramrajya'. For this to be achieved, everybody from Parliament to Panchayat has to work with single-minded devotion towards building a New India.

The behavior of People's Representatives should be exemplary and they should act as role models for others. Disrupting Parliament or Legislatures might make headlines for a day, but people and democracy would be the losers if this unhealthy trend is not checked. There cannot be any scope for obstructing the country's development - there is only one mantra to move forward - discuss, debate, decide and not disrupt.

Friends as I conclude, I would like every citizen of the country to think of posterity and ensure that our future generations inherit a beautiful, bountiful, green and a livable planet.