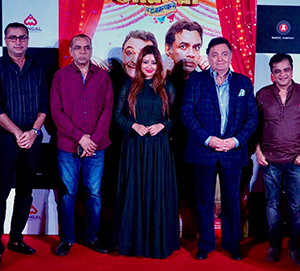 When an outright entertainer gets together two of Indian Cinema's greatest acting powerhouses, the film is definitely one to watch out for! Come 15thSeptember, get ready for a hilarious outing at the cinemas as thespian Rishi Kapoor and Paresh Rawal battle each other in Patel Ki Punjabi Shaadi! The fun trailer of the entertaining comedy drama is finally out and it promises to deliver as expected and more!

At the grand trailer launch, Rishi Kapoor entered the venue to the beats of Punjabi Dhol while Paresh Rawal made his entry with Gujarati dancers from the other side. Still being in their character, the two leads started having comic banter when they came in each other's sight.

This is the first time that the two actors will be sharing the screen. Also present for the trailer launch were Director Sanjay Chhel, Producers Bharat Patel and Kalapi Nagada along with the lead actress Payal Ghosh.

The trailer received a positive and warm-hearted response from all media and trade who were present at the event.

Presented by Bholenath Movies and Cinekorn Entertainment, the film stars Rishi Kapoor, Paresh Rawal, Vir Das and Payal Ghosh. Produced by Bharat Patel and Kalapi Nagada, the film has been written and directed by Sanjay Chhel. It is set to release on 15th September, 2017.