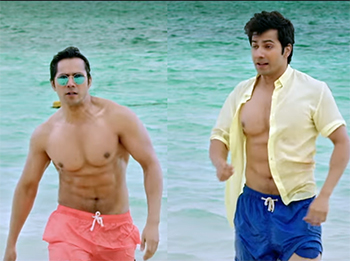 It is one of the most iconic Bollywood songs and audiences have given the new Chalti Hai Kya 9 se 12 also the same kind of love since its release yesterday.

In just 24 hours, the new version of the song which is a tribute to the original has recorded over 10 million views on Youtube racing past huge hits like Kaala Chashma, Kar Gayi Chull, Tamma Tamma, etc!

One of the most iconic songs of Bollywood is back! Varun Dhawan, Jacqueline Fernandez and Taapsee Pannu - the starcast of Sajid Nadiadwala's Judwaa 2 are paying their tribute to the huge blockbuster song Chalti Hai Kya 9 Se 12 from the original film starring Salman Khan, Karisma Kapoor and Rambha.

This song that still plays at every club, party and wedding, gets a new fun zing that is sure to sweep you off your feet! You'll surely love this song as much as you loved it 20 years back!

Judwaa 2 celebrates the hilarious story of two twin brothers, who after getting separated at birth and despite all odds, come together to save the day. Judwaa 2 is a family entertainer produced by Sajid Nadiadwala. The movie is set to release on Dussehra, 29th September 2017 and has been co-produced by Fox Star Studios.

Varun Dhawan, Jacqueline Fernandez, Taapsee Pannu have been hugely appreciated for their tribute to the original song that featured Salman Khan, Karisma Kapoor and Rambha.