UP Elections 2017: PM Modi to address rally in Mau today 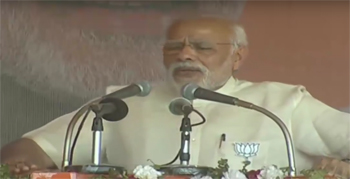 PM Modi to address an election rally in Manu today, during 2014 Lok Sabha elections, he could not addressed rally in Mau as one of the party's veteran leader passed way.

PM Narendra Mod is visiting Mau to address an election rally in Manu district in Uttar Pradesh today. Today PM Modi will full fill his promising of address the people of Manu.

The sixth phase of UP Elections will be conducted in Maharajganj, Kushinagar, Deoria, Azamgarh, Mau and Ballia districts of Uttar Pradesh.

In the 5th phase of UP Elections 10.77% voting was recorded till 9am. 18 millions voters will cast their vote today to decide the fate of 607 candidates in the state.

Polling for 5th phase for election in UP begins today in 51 constituencies. This phase is crucial for BJP, BSP, Congress, Samajwadi Party candidates in the state.

This phase is for electing candidates in major constituencies including Balrampur, Gonda, Faizabad, Ambedkar Nagar, Bahraich, Shravasti, Siddharth Nagar, Basti, Sant Kabir Nagar, Amethi, and Sultanpur to the UP Assembly.

The voting for the assembly will conclude on 8th March and results will be announced on March 11.