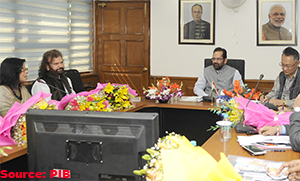 The Union Minister of State for Minority Affairs (Independent Charge),Mukhtar Abbas Naqvi has said that India is enriched with talent in art-culture, music and literature and this rich cultural heritage can become an effective mission of “social and cultural harmony”. The first meeting of Committee on Cultural Harmony Conclave under "Hamari Dharohar" scheme of Minority Affairs Ministry was today held under the chairmanship of Mukhtar Abbas Naqvi in New Delhi. It was attended by several renowned artists, musicians, writers.

Naqvi said that every corner of our country is full of rich and exquisite cultural heritage, different languages, traditions and message of cultural harmony. It is the need of the hour to provide a platform and an opportunity to these talents.

Naqvi said that Centre is making all out efforts so that “Hamari Dharohar” scheme of Ministry of Minority Affairs can be helpful in Cultural Harmony Conclave. The Minister further said that Ghazals, poems, qawwalis, traditional songs-music can be utilized as an effective and constructive mission to shape, showcase and empower our cultural harmony and heritage.

Naqvi said that in different parts of the country, through “Hamari Dharohar”, not only the eminent artists but also those talented artists, who had not been given a platform and much attention yet, can be provided with an opportunity which will also convey the message of cultural harmony.

Naqvi said that programmes of ghazals, poems, qawwalis, traditional songs-music and dance can be organized in different parts of the country under “Hamari Dharohar” scheme. A high level committee, constituted in this regard, will chalk out a framework for the entire process including nature of the programme, venues, dates, months and the participant musicians, lyricists, dancers, singers and other artists.

Most of these members attended today’s meeting. The Ministry has been planning to organize the first programme of cultural harmony conclave at Delhi’s Purana Quila.