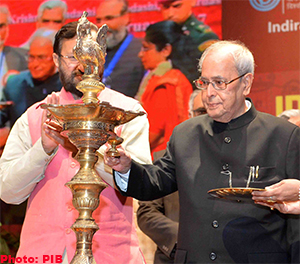 Speaking on the occasion, the President complimented the Indira Gandhi National Open University (IGNOU) and the Bharatiya Shikshan Mandal for organizing this conference bringing together intellectuals, academicians and researchers to unravel various aspects of the “Bharat Bodh” (Idea of Bharat). He expressed happiness that these two collaborators have brought their respective areas of expertise and scholarship to this important three day conference. He stated that the synergy and dynamism of these institutions should channelize the exploration of thousands of years of our journey as a civilization and people. He also hoped that deep insights would be gained into the idea of statecraft, governance, individual-society relations, structures, purposes and methodology of education, organic relationships with nature, and correlation between spiritual and material life.

The President said that Bharat has always been recognized as the storehouse of knowledge and discovery - knowledge which liberates, and discovery which fathoms the deepest thoughts of humanity and co-existence. As the origin and repository of philosophical and spiritual values, rivers of wisdom flow through the collective consciousness of our great people. He quoted American author Mark Twain and said “India is the cradle of the human race, the birthplace of human speech, the mother of history, the grandmother of legend, and the great grandmother of tradition. Our most valuable and most instructive materials in the history of man are treasured up in India only”. The President said that this was indeed true. India is a land of great traditions, history and discoveries. Its people have lived in this great civilization giving rise to a unique trait of oneness overcoming the apparent contradictions, thriving on a composite culture and yet alive to the identities of its sub-parts. The President said that India is a land of huge diversity. Yet all its people are living under one system, one flag and one Constitution. All of us are proud to be Indiansand we celebrate this diversity. He hoped that the deliberations at the Conference would enrich our perceptions regarding our country.

The President said that the idea of Bharat flows from the eternal wisdom of our rich intellectual traditions. Constant churning and refinement has been the secret of the continuity of the Bharatiya thought through times and turbulences. Our core civilizational values which are equally relevant today and which speak of love for the motherland, performance of duty, compassion for all, tolerance for pluralism, respect for women, honesty in life, self-restraint in conduct, responsibility in action, and discipline – form the Bharatiya world view. The Bharatiya conceptualization of the world encompasses philosophy, knowledge systems, principles of statecraft and legality, literature, architecture, art and music and all other important spheres of life. The diverse strands of the Bharatiya thought find unity in their objectives similar to the diversity and oneness of the universe. They remain instilled with the same essential spirit residing in every being and non-being. This is manifested in the unique ways of celebrating our diversity and confluence, and change with continuity.