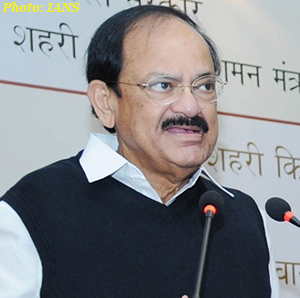 Minister of Housing & Urban Poverty Alleviation M.Venkaiah Naidu today urged real estate developers to take up affordable housing projects in a big way while stressing that therein lies the future of the real estate sector. Elaborating on his statement, the Minister said that “ The Government’s focus on ensuring Housing for All including the Middle Income Groups offered immense opportunities both at the bottom and the middle of the pyramid which needs to be seized by the developers who have seen ups and downs in recent year”. He spoke at a Conference on “Real Estate Sector-Post Remonetisation and RERA” organized by PHD Chambers here today.

Venkaiah Naidu further said that the Government has paid more attention to the real sector than any other sector by announcing more than 20 supporting measures to revive real estate sector over the last two years including announcing the long awaited infrastructure status for affordable housing besides several tax concessions and exemptions. He further said that under Prime Minister’s Awas Yojana(Urban), people belonging to Economically Weaker Sections, Low Income Groups and Middle Income Groups with incomes up to Rs.18 lakh per year have been made eligible for central assistance up to Rs.2.35 lakh per each beneficiary. “Low cost long term financing under infrastructure status, tax concessions and central assistance under PMAY and the scale of housing needs of these sections make affordable housing the best investment opportunity and developers are left with no further excuses for not seizing this opportunity” Naidu stressed.

Naidu said that various initiatives of the Government including the Real Estate (Regulation and Development) Act, 2016, the Benami Properties Act and note withdrawal have enabled a new real estate eco-system based on 4 ‘Cs’ viz., Character, Credibility, Confidence and Cash that would help revive the sector. He said that while the Real Estate Act removes the taint restoring the character of the sector leading to credibility and enhanced confidence of buyers, central assistance, reduced interest rates and tax concessions keep more cash in the hands of buyers.

Stating that the Ministry of HUPA has so far approved construction of over 16 lakh affordable houses for urban poor with an investment of about Rs.90,000 cr and central assistance of about Rs.25,000 cr, Naidu expressed concern over private developers not taking up any projects so far. He urged them to change their mindsets and outlook and take up affordable housing projects given the business logic that goes with it in the changing context.

Naidu said that his Ministry would soon convene a Round Table with real estate bodies and representatives of banks and Housing Financing Companies and others concerned to deliberate on the road ahead for promoting affordable housing so that the target of ensuring Housing for All by 2022 would be met.

On the effects of note withdrawal, the Minister noted that it was only a temporary interlude and the process of remonetisation is almost completed. Naidu noted that “For various reasons, real estate sector over the years has come to be seen as the villain in the theatre of corruption and note withdrawal was expected to address flow of unaccounted for money in to the sector by about 20% to 30% which in turn would bring down prices substantially”.