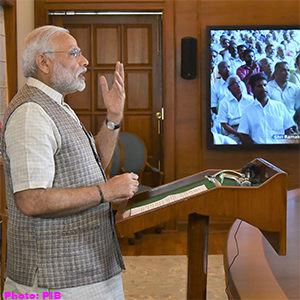 Namaskaram. Greetings to everyone.

I am privileged to be present among you at the beginning of the 7 day session of Sri Ramakrishna Vachanamrita Satram.

When I think of the words of a great mind from Bengal, translated into Malayalam, being read and debated in Kerala, I am humbled by how ideas are shared and adapted across our country.

What could be a better example of Ek Bharat...Shreshtha Bharat?

This practice that you have started builds on a long tradition of making the teachings of the scriptures, the words of great gurus available to the common people.

This is part of the long oral tradition of India that has evolved constantly to adapt to changing times and circumstances, keeping the eternal values intact.

This tradition evolved from the Shrutis to the Smritis.

The shrutis, the four Vedas and Upanishads are the source of Dharma: they are sacred knowledge transmitted by great Indian sages from generation to generation.

Shrutis are believed to be revealed divine knowledge, transmitted orally.

Smriti is a class of texts that are based on memory and interpretation.

Since the Vedas and the Upanishads were difficult to understand for common people, the smritis were written to explain, interpret, and clarify primary revelation through stories and moral lessons.

Thus it is clear that the epics, Puranas and the Arthasastra of Kautilya are all smritis.

The effort to reach every person through the means that are best suited to them continued over time.

To reach the common people, there was a need to make dharma, or right living, more accessible, closer to their daily lives.

The Bhagvat describes Devarshi Narada, singing the praise of God

The message of the saints was carried further by folk singers, the Katha-vachak, the dastangois.

Kabir's dohas, Meera's bhajans were carried by singers from village to village.

India is a land that is blessed with a rich cultural and intellectual milieu.

Our land is home to writers, scholars, saints and seers who have expressed themselves freely and fearlessly.

And whenever the history of human civilization has entered the era of knowledge, India has shown the way.

A false perception was created about India that India needed social, political and economic reform initiated by outsiders.

This became a reason to justify colonialism too.

Such notions were absolutely false because India's soil is that soil from where change has always originated.

And this change originated from within, driven by our saints and seers who made it their mission to transform society and undertake mass movements to eradicate evils that may have entered into our society.

Our Saints integrated each and every citizen in their quest for social reform.

Nobody was left outside the ambit.

This is why our civilization stands tall, overcoming obstacles.

Those civilizations that did not change with time vanished.

We, on the other hand even altered practices over centuries.

Some practice may have been prevalent a few centuries ago but if it was felt redundant, it was altered.

We have always been open to new ideas.

Through our history, our Saints did things that may seem small but their impact was big and this altered the course of our history.

Long before any faith, any culture, India had women saints who took up the issue of gender equality.

They wrote fearlessly and expressed themselves through their powerful writings.

In Hindu philosophy, time is accepted as a very important factor of the absolute - we are Dik-Kaal-Baadhit - conditioned by space and time.

The role of the Guru is to interpret the eternal values in the context of the times - so that, like a river that flows, and renews itself as it flows, the stream of knowledge is ever fresh and vibrant.

We all remember the role of Shri Narayana Guru in transforming Kerala.

A saint and social reformer from a backward caste who transcended the barriers of caste and promoted social justice.

When the Sivagiri pilgrimage was started, he declared its goals to be the promotion of education, cleanliness, devotion to God, organization, agriculture, trade, handicrafts, and technical training.

Could there be a better example of a teacher setting standards for the advancement of society?

Speaking of Sri Ramakrishna in this gathering may seem like carrying coals to Newcastle, but I cannot stop myself from mentioning those attributes that make him so relevant to present times.

He was a part of the tradition of Bhakti saints and in the Kathamrit we find many references to Chaitanya Mahaprabhu - his trances, his songs, his utter devotion.

But he renewed the tradition and made it stronger.

He broke the mental barriers that keep us apart barriers between religions, between castes.

He was the saint of social harmony.

His message is that of tolerance, of devotion, of surrendering oneself to the divine of One Lord with different names – the gyaani, the yogi, and the devotee. “The same Being whom gyaanis call Brahma - the Absolute, is called Atma - Universal Soul, by yogis, and Bhagavan - Personal God with divine attributes, by devotees.

He found that there were many ways to the divine, but followed with devotion, they all lead to one goal.

"The Reality is one and the same;" he said, " the difference is in name and form."

"It is like water, called in different languages by different names, such as jal, neer, pani, and so forth.

Likewise, in German it is ‘Wasser', the French call it ‘Eau', ‘Acqua in Italian, ‘Mizu' in Japanese.

In Kerala you call it ‘Vellam.'

All of them denote one and the same thing, the difference being in the name only.

His teachings are particularly relevant to us today, when we are confronted with people who use religion, caste to divide and create animosity.

No one can read the story of his life without being convinced that God alone is real and that all else is an illusion.

Sri Ramakrishna is a link between the ancient and the modern.

He showed how the ancient ideals and experiences could be realized even while following the modern way of life.

But due to their very simplicity, these were embedded in the minds of the listeners.

If we had not a teacher like this, would there have been a disciple like Swami Vivekananda?

The great karmayogi took forward the thought of his guru -

Jatra Jeev, Tatra Shiv - wherever there is a living being, there is Shiva;

to his lifelong dedication to serving the Daridra Narayan.

Swami Vivekananda said - Where should you go to seek God?

Are not all the poor, the miserable, the weak, god? Why not worship them first? Let these people be your God.

His clarion call -“Now is wanted intense Karma-Yoga with un-bounded courage and indomitable strength in the heart. Then only will the people of the country be roused”
- continues to inspire us to action, continues to give us courage.

Ramakrishna Mission's record of service is evidence of this commitment.

We find the mission in poor areas, among tribals, in areas stricken by need or disaster trying to alleviate suffering.

It does not matter what community the person is from, what her caste or beliefs are.

All that is important is that he or she can be helped through selfless service.

For one's own salvation and for the welfare of the world.

The flame that has been lit today - the satram that has been started- should illuminate our hearts - एक दीप से जले दूसरा, जलते दीप हज़ार।

Let Sri Sri Thakur Ramakrishna's words inspire us to see the divine in all things, to harness self and the ego in the service of the poorest and weakest, so that we find the greater truth that is the essence of all religions.

Again, it is the words of the great disciple that I will take as my guide: Let us work on, doing as we go whatever happens to be our duty, and being ever ready to put our shoulders to the wheel.

Then surely shall we see the Light!

Thank you. Thank you very much.