Estimated growth rate of Agriculture Sector is 4.1% in the next financial year: Radha Mohan Singh 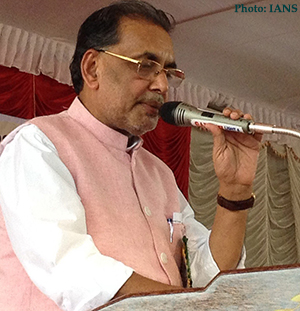 Government taken many initiatives in the budget for the welfare of agriculture & for the prosperity of farmers: Radha Mohan Singh

As per the second advance estimate for year 2016-17 production of foodgrains increase by 20.41 million tonnes than previous year 2015-16: Agriculture Minister

The Union Minister of Agriculture and Farmers Welfare, Radha Mohan Singh said that despite difficult challenges being faced by ICAR in its working period of 87 years, it has attained many achievements and these achievements are the milestones of progress of agriculture. Increase in production and income, development of institutes, human resources, development of new techniques, agriculture diversification are the areas in which ICAR has established new standards of success. Radha Mohan Singh made this statement today in the 88th AGM of ICAR Society in New Delhi.

On this occasion, Secretary, the Department of Agricultural Research and Education & DG, ICAR, Dr. Trilochan Mohapatra and distinguished members of Society and senior officers of ICAR were also present.

Singh said that Government is committed to double the income of farmers in five years. In this budget, holistic development of agriculture is the main focus in which to provide credit to farmers on affordable rates, assured supply of seeds and fertilisers, increase in irrigation facilities, increase in productivity through soil health cards, through E-nam assured market and providing profitable price has been emphasised.

Singh said that during this Rabi in comparison to last year 2015-16, we got more sowing has been done viz. 7.7% in wheat, 12.96% in pulses and 12.69% in oilseeds which is in total 6.86% more in comparison to last year. Agriculture Minister said that Indian agriculture scientists have played a major role developing research and technology and bringing green revolution, and thereby in the development of agriculture. Since 1951, production of food grains has increased five times, horticulture production by 9.5 times, Fisheries production by 12.5 times, milk production by 7.8 times and egg production by 3.9 times. This has made a considerable impact on national food nutritional security. Our scientists have major role in increasing the excellence of higher agriculture education.

To increase International co-operation in the field of agriculture during October, 2016, in New Delhi with the help of coordination unit, one MoU has been signed for establishment of BRICS research platform in agriculture. This unit will be managed by DARE, GoI. Besides this in the year 2016, 17 international collaborative projects have also been approved.

Singh said that since agriculture is state subject, so State Agriculture Ministers have an important role in its progress. On this occasion Agriculture Minister appealed to all the representatives to develop scientists-state-farmer linkage and to work unitedly in coordination with centre for the prosperity of farmers and progress of agriculture.