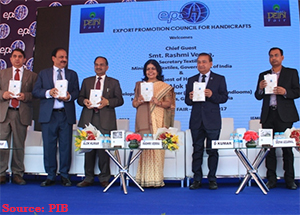 While inaugurating the fair, the Textiles Secretary congratulated EPCH for helping earn a place for IHGF-Delhi Fair in Limca Book of World Records. Smt. Verma said that every time she visits the fair, she sees new product lines on display; she said this is the reason that large number of buyers from across the globe visit IHGF to source their requirements.

She further said that in order to be competitive, artisans and manufacturers of Indian handicrafts at craft clusters need guidance in creating new products. She said that EPCH is playing a key role in handholding and providing the platform at IHGF-Delhi Fair, to artisans, craftspersons and up-coming entrepreneurs from different craft clusters to interact directly with international buyers. Through this direct buyer-seller meet, Indian handicrafts can not only grow further in terms of exports, but can also further enhance the image of India in the market of home, fashion, lifestyles and textiles across the world.

The Secretary showed great satisfaction that VRIKSH certificate for wooden items has been accepted worldwide. She added that Office of Development Commissioner (Handicrafts) is working towards branding of handicraft items, just like ‘India Handloom’ Brand has been launched for the handloom sector. Smt. Verma said that this will further help in quality assurance, certification and selling of handicrafts products in international markets.

Executive Director, EPCH, Shri Rakesh Kumar said that the credit for entry of IHGF-Delhi fair into Limca Book of World records as the largest congregation of handicrafts producers under one roof goes to each and every stakeholder, including exhibitors, buyers, Office of Development Commissioner (Handicrafts) and team EPCH. He further said that during next edition of IHGF-Delhi fair, EPCH will come up with a procedure for design registration, in order to safeguard the interest of the creator of the item and discourage copying of products amongst the community of manufacturers.

Export Promotion Council for Handicrafts[EPCH] which is a nodal agency for promotion and development of handicrafts has been organizing the Indian Handicrafts & Gifts Fair for the last 23 years. IHGF-Delhi Fair Spring 2017 is expected to generate huge amount of enquiries and orders.