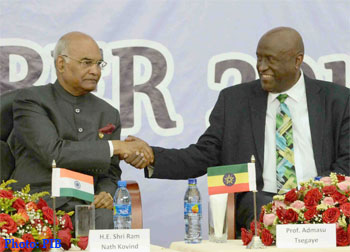 It gives me great pleasure to be here with you at the concluding event of what has been a very successful and very emotional journey to Ethiopia. I took office as the President of India a little over two months ago. As my first official visit overseas was being planned, I felt it important that it take place to Africa, a continent that is always at the centre of Indian foreign policy and indeed Indian thinking. After all, this is the continent where Mahatma Gandhi, the Father of our Nation, began his mission for truth and liberty.

The choice of Ethiopia as the focus country of my first visit is a reflection of not just the importance we in India give to your country and its leadership role in world institutions, but to our time-tested friendship – one going back 2,000 years to the days when our countries, our civilisations I should say, first traded together.

I arrived as a pilgrim from the Land of Tea to the Land of Coffee. As a visit, this meeting of old friends has been perfect. Your country’s and your government’s hospitality has been overwhelming. Today, there is the additional privilege of coming to this illustrious university, the oldest in Ethiopia, with a history going back to 1950. To add to the poignancy, we are in a hall named after Nelson Mandela, a hero of our times and in so many ways the Gandhi of Africa. It would seem that the blessings of two of the greatest humans in history are with us today.

Ethiopia and India are both divided and united by the Indian Ocean. Over the centuries visitors between Ethiopia and India have travelled the Indian Ocean and traded in a variety of goods – from gold and ivory to spices and medicines. Yet the most important cargo they have carried across this majestic ocean is the cargo of knowledge. That knowledge has been cradled by education. And in turn that knowledge has sculpted the principles and values that our countries share. The Ethiopia-India partnership has truly been a meeting of minds.

Educational cooperation between our two countries has been the fulcrum of our engagement. When Ethiopia embarked on its efforts to expand its education sector, Indian teachers were invited here to teach in elementary and secondary schools. Those early pioneers travelled to the remotest parts of the country, instilled values and ideals in young minds and dedicated entire lifetimes to the noble calling of teaching.

I understand that some of them have continued to live here and a few are even present among us today. I am also given to understand that almost every Ethiopian who has been taught by an Indian teacher has fond memories to share of his or her formative years, and smiles at the very mention of India. I commend these teachers for their efforts. They have done our countries a remarkable service. We can never thank them enough.

What began with Indian teachers in elementary schools has, in recent years, been carried forward in higher education. Indian professors are employed by various universities across Ethiopia. I am happy to learn that more than 2,000 Indian faculty members are contributing to teaching and to academic research in Ethiopian universities in fields as diverse as humanities and the social sciences, engineering, business management, and medicine.

Indian academics comprise the largest and among the most valued expatriate teaching communities in Ethiopian universities. We are proud that they serve as a bridge between our respective academic communities. They have fostered linkages and research collaborations between universities and educational institutions in both countries. All of us should encourage such efforts.

Just as Indian teachers have contributed to Ethiopian institutions, a steady stream of Ethiopian students has added to the scholarship and cultural mosaic of universities in India. These students have then used their degrees and their learning to add value to their home country of Ethiopia, while remaining special friends of India. It is a matter of great happiness for us that alumni of Indian educational institutions occupy positions of eminence in this country. I understand this list includes the First Lady and at least nine Ministers in the Cabinet.

The appreciable and welcome arrival of Ethiopian students in Indian campuses has its roots in the Indian Technical and Economic Cooperation Programme, popularly known as ITEC, which was launched in Ethiopia in 1969. Subsequently several other schemes have been added to this flagship training programme.

Every year India welcomes hundreds of Ethiopian students as part of its African scholarship programmes. They come on fully-funded scholarships to carry out research or get a higher degree. I am told that on an average one Ethiopian boards a flight to India each day to avail these scholarship and training opportunities. This is a shining example of cooperation between two emerging economies.

In addition, there is the Pan-African e-Network Project, a milestone in educational and capacity building collaboration between African countries, including of course Ethiopia, and India. It was created in this very city in 2009. Crafted in Addis Ababa eight years ago, it connects 48 countries of Africa to India.

The Network offers tele-education services from five reputed universities in India, along with tele-medicine services. In Phase I of its operation, about 7,000 students completed postgraduate, undergraduate and diploma certification courses from Indian universities. The Government of India is in the process of upgrading and broad-basing this framework with a view to offering online courses to students across Africa.

In terms of our demographic profiles, both Ethiopia and India are young countries: 65 per cent of India’s people are below the age of 35; and 64 per cent of Ethiopia’s people are below the age of 25. We have a similar set of challenges. These centre on equipping our young people and our students with the education and skills to compete in the 21st century economy; with the capacity building to get jobs and employment opportunities that match their hopes; and with the sensibility to balance growth and development with pressing concerns of water and climate change, and exciting breakthroughs in clean and renewable energy.

Above all there is the need to foster an economic model that contributes to local communities, rather than extracts from them. This is fundamental for the future of Africa, for the future of India, for our shared future, and for the future of our young people. In this, Ethiopia and indeed all of Africa will find India a willing and sensitive partner.

We have always stood shoulder to shoulder. In the 1940s, in the midst of World War II, Indian soldiers supported Ethiopian freedom fighters in their effort to liberate their country from foreign invasion. Paradoxically, this was even before India itself had become independent. Ethiopians and Indians have known and trusted each other for the longest time.

Friendships among countries and societies are brewed and savoured, almost in the manner of an Ethiopian coffee ceremony. The outcomes of such a friendship are seldom a quick sprint; they are more likely to be a marathon, a long-distance run. And surely the land of Bikila and Gebrselassie knows and treasures the value of a long-distance runner.

In India, Ethiopia has a long-distance running partner. Come, let us leap over every hurdle together.

Thank you and wishing all of you the very best.