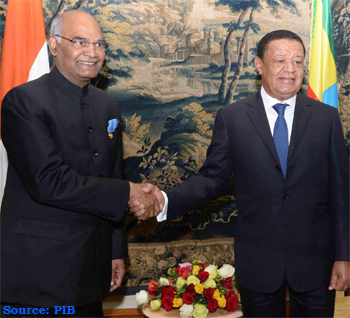 Address by the President of India Ram Nath Kovind at India-Ethiopia business dialogue to commemorate the 12th anniversary of the India Business Forum in Addis Ababa on October 5, 2017

It is my pleasure to be here for the India-Ethiopia Business Dialogue and to address a business community that is, really, the legatee of an age-old relationship.

Ethiopia and India are old civilisations with young populations. Ethiopia is the cradle of humankind. Earlier today, at the National Museum in this city, I was privileged to get a glimpse of the remains of Lucy, who is in a sense our common mother. It is not without reason that Ethiopia, a stead-fast friend and a sister civilisation for India, is the focus of my first overseas visit since taking charge as President of India.

Our countries have been trading with each other for centuries. Trade relations between Ethiopia and India flourished during the ancient Axumite Empire from the 1st century AD. The earliest recorded evidence of our bilateral commercial engagement is in the form of Indian traders coming to the ancient Red Sea port of Adulis to trade silk and spices for gold and ivory.

In the 19th century, the pioneers of Indian investment to Ethiopia were businessmen from our western state of Gujarat, who migrated to this rich and fertile land.

In recent years, Ethiopia’s remarkable economic growth and progress has been an object of global admiration. And I am happy to note that India has been a partner in this growth through trade and commerce, through investments and sharing of expertise, as well as through the large and vibrant Indian business community present in Ethiopia.

I would like to congratulate the Indian Business Forum (or IBF) that represents this community. It is playing a lead role in encouraging Indian investment and promoting trade and commerce between India and Ethiopia. I understand IBF was set up in 2005 and is marking its 12th anniversary. I am also happy to learn that this Forum is the first partner-country forum of its kind in Ethiopia and represents more than 100 Indian companies.

India is now among the top three foreign investors in Ethiopia. Indian investment has made a mark in textile and garments, engineering, plastics, water management, consultancy and ICT, education, pharmaceuticals and healthcare. Indian investments in Ethiopia have had a significant presence in manufacturing and value addition to local resources. They have created jobs in this country, and they have contributed to the prosperity of Ethiopian families.

Ethiopia has been the largest recipient of Indian concessional lines of credit in Africa with over US$ 1 billion committed to projects in power transmission and sugar. I am happy to learn that the Finchaa sugar project has been completed and handed over to the Ethiopian side. Two other projects in the sugar sector have also gone into production, and are expected to be handed over shortly.

It is a matter of pride for us that Indian investment is lauded and is considered a model worthy of emulation. In this regard, I would like to acknowledge efforts of IBF and its members. You have been fair and loyal partners to the people and business stake-holders of Ethiopia as well as excellent ambassadors of your country. In India, we are proud of you.

India’s bilateral partnership with Ethiopia is deep and wide. In the past seven decades, our diplomatic engagement has helped us collaborate in virtually every avenue of human activity. Both our governments have identified trade and economic relations as a priority for the near future. The economic relationship covers trade, private investment, concessional loans for infrastructure projects and development assistance, largely for capacity building.

The Indian economy is in the early stages of an exciting journey. Ambitious policy measures such as the introduction of the Goods and Services Tax (GST) have made doing business in India easier. GST has unified the Indian market, hitherto segmented among multiple states and tax jurisdictions. Under our flagship programmes like Make in India and Start-up India, we have made concerted efforts to attract technology, investments and best practices from across the world.

Our programmes directed at the social sector – such as those for skilling our youth and providing housing for all – and massive infrastructure programmes are opening up new opportunities and creating the impulse for rapid growth. We are also willingly embracing technology and digital solutions, and using these to better the lives of our most underprivileged fellow citizens.

These reforms and initiatives are aimed at transforming the country and laying the foundations of a New India. Yet, there is much we can both learn from and share with the world, and particularly with partner developing countries like Ethiopia. I would say to our global friends that there has been no better time to engage with India.

Both Ethiopia and India have young populations. Our youth are our greatest resource. But to realise their potential, we need to educate them and give them the skills needed to become productive in an increasingly complex world. After all, the building of a 21st century economy requires the building of human capital – and equipping it for 21st century economic realities.

Along with a similar demographic profile, Ethiopia and India face similar challenges related to the health and well-being of our populations. India has been a source of affordable pharmaceuticals, generic medicines and specialised healthcare for the people of Africa, including Ethiopia. Education and health care will remain focus areas of our engagement with Ethiopia.

This business dialogue has helped us in bridging gaps between our business communities. Most important, it has identified actions the two governments could take to further facilitate investments and trade – be it in the realm of visa policies, banking procedures and laws, or customs regulations and practices.

Both our government want to create an enabling environment. For this, we value the specific recommendations made by our business communities today.

India’s relationship with Ethiopia is symbolic of its engagement with the African continent, of which Addis Ababa is such a vital hub. At the Third India Africa Forum Summit in New Delhi in 2015, we had announced the offer of concessional credit of US$ 10 billion over the next five years to Africa. This was in addition to the ongoing credit programme. We have also committed to a grant assistance of US$ 600 million that will include an India-Africa Development Fund of US$ 100 million and an India-Africa Health Fund of US$ 10 million. The Asia-Africa Growth Corridor is another initiative brimming with potential.

I would invite you to partner us in these frameworks and benefit from them. It is critical that such large projects are designed transparently and bring prosperity to local communities. In the end, trade and investment works best – or I would say works only – when it helps host communities and people on the ground.

As Ethiopia’s long-standing partner, India remains optimistic about and invested in your growth story. We look forward to building on our numerous synergies and complementarities in sectors ranging from light manufacturing to food processing, clean and renewable energy to healthcare. And in terms of capacity building of both people and institutions. Today, we have made a new beginning as partners in innovation and technology. With our space programmes to inspire us, the sky is the limit for India and Ethiopia. Literally.

On a closing and more down-to-earth note, I must call upon Ethiopia and India to work together to push for reform in institutions of international financial and monetary governance, and make these relevant to our age. It is only appropriate that such ancient business partners as India and Ethiopia strive together for a more equitable and contemporary global economic architecture.