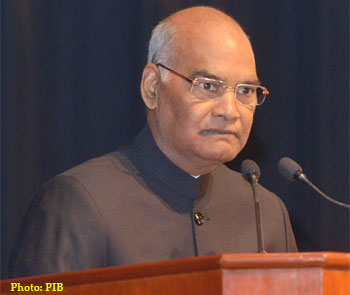 1. This is my second visit to Kerala since becoming President of India, but it is the first time I am visiting Kochi in my current capacity. As an individual with a background in the legal profession, I am doubly happy to be here for the closing function of the diamond jubilee of the Honourable High Court of Kerala.

4. Who can forget Justice V.R. Krishna Iyer, a judge of remarkable humanistic values and the conscience keeper of the legal fraternity in our country? In 1968, he became a judge in this Honourable High Court. Later he left an indelible imprint on our national life while he was at the Honourable Supreme Court. He is remembered and cherished as a role model to this day.

It has given important verdicts, including on:

6. The judiciary is one of India's most valued and respected institutions. Its fearless and independent functioning and stature has enhanced India's credibility in the democratic world. Every Indian is proud of the judiciary and respects its verdicts and its commitment to the values that embody our nationhood. The constitutional framework rests on the three pillars of the judiciary, the legislature and the executive. Our Constitution is perhaps the best document in the world in laying down the balance between the roles of these three institutions.

7. Delay in justice delivery is a pressing concern in our country. Often those who suffer are among the poorest and most underprivileged in our society. We must find mechanisms to ensure quick disposal of cases. We could all consider an approach that makes adjournments the exception in an emergency situation rather than a tactic to prolong court proceedings. We must find a way forward. And I am happy to note that the Judiciary in moving ahead in this direction.

8. It is important to not only take justice to the people, but also to make it understandable to litigating parties in a language they know. High Courts deliver judgements in English, but we are a country of diverse languages. The litigant may not be conversant with English and the finer points of the judgement may escape him or her. The litigating parties will thus be dependent on the lawyer or another person to translate the judgement. This can add to time and cost.

10. I have only made a suggestion. It is for the judiciary and the legal fraternity to discuss this and decide as appropriate.

11. Our society and economy have become more complex as well as more integrated with the global system. The challenges before the judiciary too have grown. The nature of disputes and cases that come to our courts has gradually undergone change. The dynamism and evolution in business and trade law and in financial markets; the changing nature of intellectual property and technology; and the still emerging norms of the digital sphere and of Internet law and governance – these are among examples of new questions and frameworks that the judiciary has had to grapple with. It has done so admirably and with enlightenment and thought.

12. Even so, the nature of these challenges will only expand in the coming years, especially as technology advances rapidly. Our judiciary and justice delivery mechanism will need to continue to keep up with technology and with changes in our society, as indeed they have been so capably doing. I am confident they will remain more than equal to the task.

13. Our legal system, with an independent judiciary as its bedrock, is an essential part of our nation building process. It acts as a corrective and it upholds the sanctity of the law and of natural justice. And it functions as the guardian of the ethical principles underlying the Constitution. This makes everybody connected with the process of justice delivery a nation builder. Both judicial officers as well as court officers – namely advocates, who assist in the justice delivery system – are nation builders. On them – on you, I should say – lies a heavy responsibility.

1. That is why each time you take your place in the courtroom please be conscious that common citizens of this country are looking to you – and looking up to you. Our common citizens have that sacred trust and faith that the judiciary will ever stand by them, and never let them down. I am sure the judiciary will always live up to the high expectations that our people have of it.

2. While ending, I would once again like to congratulate the Honourable Kerala High Court and the people of the state on this diamond jubilee. And I would like to wish all the judges, retired judges, members of the Bar and other stakeholders associated with the Honourable High Court the very best.