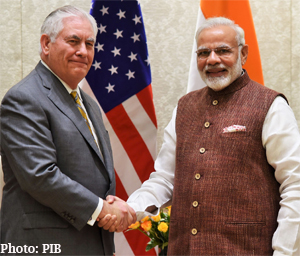 Prime Minister welcomed Secretary Tillerson on his maiden visit to India in his current capacity. Prime Minister noted with appreciation the firm upward trajectory in the bilateral strategic partnership following the positive and far-reaching talks with President Trump in June this year.

Prime Minister shared the resolve expressed by Secretary Tillerson on taking further steps in the direction of accelerating and strengthening the content, pace and scope of the bilateral engagement. They affirmed that a strengthened India-US partnership is not just of mutual benefit to both countries, but has significant positive impact on the prospects for regional and global stability and prosperity.

In the context of President Trump's new South Asia Policy, Prime Minister noted the commonality in the objectives of eradicating terrorism, terrorist infrastructure, safe havens, and support, while bringing peace and stability to Afghanistan.

In this regard, Secretary Tillerson exchanged views on his recent travels in the region with Prime Minister. They further discussed stepping up effective cooperation to combat terrorism in all its forms and promoting regional stability and security.