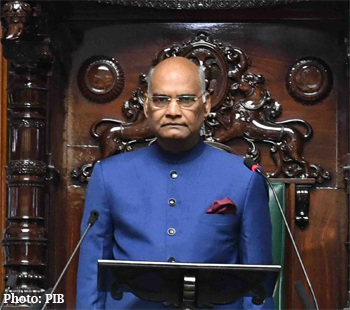 The President of India, Ram NathKovind, graced the 'Vajramahothsava' - Diamond Jubilee Celebrations on completion of 60 years of VidhanaSoudha, and addressed the members of both Houses of the Karnataka Legislature at Bengaluru, (October 25, 2017).

Speaking on the occasion, the President said that it is not just the 60th birthday of this building (VidhanaSoudha) that we are marking. This is also the diamond jubilee of the debates and discussions in the two Houses, of legislations that have been passed and policies that have been shaped for the betterment of the lives of the people of Karnataka. Both Houses of the Legislature jointly and collectively represent the will and aspirations of the people of Karnataka. Not just that, the two Houses also represent the ideals and optimism and the energy and dynamism of the Kannadiga people. This building is a monument to the history of public service in Karnataka. A galaxy of political stalwarts has participated in the proceedings of the two Houses that meet here. They have spoken in many memorable debates.

The President said that Karnataka's dreams are not for Karnataka alone; they are dreams for all of India. Karnataka is an engine of the Indian economy. It is a mini-India that draws – without losing its cultural and linguistic distinctiveness – youth from all over the country. They come here for knowledge and for jobs, and they give their labour and intellect. Everybody gains.

The President said that we are aware of the three D's of the legislature,that it is a place to debate, dissent and finally decide. And if we add the fourth D, decency, then the fifth D, namely democracy, becomes a reality. The legislature is an embodiment of the will, aspirations and hopes of the people of Karnataka, irrespective of political belief, caste and religion, gender or language. It needs the collective wisdom of both Houses of the Legislature to fulfil the dreams of our people.

The President said that it is for the Legislative Assembly and the Legislative Council to function as sacred temples of democracy, and contribute to raising the level of political and policy discourse. As representatives of the people of Karnataka, the members of the two Houses here have a special responsibility. He called upon legislators to make the diamond jubilee not just the celebration of a proud past - but a commitment to an even greater future.