Second Metro fare hike will be a clear violation: Kejriwal 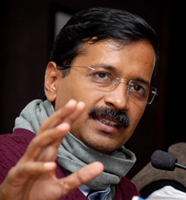 Delhi government is of the clear view that in case the Delhi Metro Rail Corporation (DMRC) insists on imposing its unjustified decision of the steep second fare hike this year, it will be a gross violation of the law by which Delhi Metro came into existence.
Repeated statements from the DMRC and those arguing in favour of the fare hike have repeatedly referred to the decision of the Fare Fixation Committee, and it is being stated that the DMRC and its Board are bound by the recommendations made by this committee.
Section 37 of the Delhi Metro Railway (Operation and Maintenance) Act, 2002, states :“ Recommendations to be binding on metro railway administration.—The recommendations made by the Fare Fixation Committee shall be binding on the metro railway administration.”
Since the above mentioned section is clear, therefore the DMRC needs to answer how the committee’s recommendation that “there shall be a gap of one year between two fare hikes”, has been violated by the Delhi Metro and on what basis is the second hike being defended by its officials ?
Therefore it is clear that after the first fare hike in May this year, Metro fares cannot be hiked for the second time within five months on 10th October, according to the law.
DMRC needs to tell its commuters and the people of Delhi that can the recommendations of the Fare Fixation Committee be implemented selectively in violation of the law ?
Delhi government has never interfered in the functioning of DMRC since it assumed office on 14th February 2015 and has consistently provided all kinds of support for its operations, but the government cannot remain a mute spectator at a time when the interests of commuters are being overlooked.
It is also a matter of serious concern that the objections raised by the elected Delhi government were ignored by the Fare Fixation Committee in September last year.
Though the DMRC is trying to justify the steep fare hike, but it has still not answered the key question that if it felt the hike was necessary, then why was there a gap of eight months between the meetings of the Fare Fixation Committee and the DMRC Board ?
Delhi government appeals to the Central government to invoke its powers under Section 86 Section 86 of the Delhi Metro Railway (Operation and Maintenance) Act, 2002 to put on hold any fare hike till the entire matter is reviewed jointly by the Central and Delhi governments.