President of India to Preside over Two-Day Conference of Governors on October 12 & 13, 2017 at Rashtrapati Bhavan 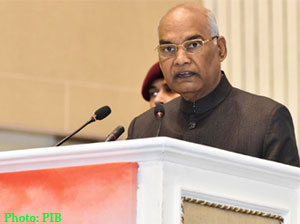 The two-day Conference will deliberate on important agenda items in different sessions. The theme of the opening session will be ‘New India-2022’. India will complete 75 years of independence in 2022. ‘New India 2022’ requires a number of initiatives in infrastructure to cater to the needs of citizens of the country. Similarly, to build ‘New India 2022’, emphasis has to be given on various services viz. access to quality education, training and skill development, healthcare, cleanliness, open-defecation free cities and villages, pollution free environment, safety and security of citizens, etc. The Vice President and the Prime Minister will be attending the sessions and addressing the conference.

The first session of the Conference will start with a presentation by NITI Aayog on the possible elements of ‘New India 2022’. Then the Governors will have detailed deliberations on the subjects of ‘Infrastructure for New India 2022’ and ‘Public Services for New India 2022’ in two groups. In each group, concerned Ministers of the Government of India will be present.

The second session will be on the subjects of ‘Higher Education in States’ and ‘Skill Development and Entrepreneurship to Make Youth Employable’. The Minister of HRD and Minister of Skill Development and Entrepreneurship will make presentations covering the vision and roadmap for addressing the issues on the agenda. Governors will also give their remarks and suggestions on ways to achieve the goal along with their experiences from the States.

In the third session on the second day, Governors will make brief remarks on any special issues pertaining to their respective States/Union Territories. They will also highlight key achievements or initiatives started in Raj Bhavans, which can be adopted or replicated.

In the concluding session, a brief report on the deliberations will be presented by the respective conveners. The deliberations and outcomes of the Conference will be used by Governors to sensitise stakeholders in their respective States as well as for working towards ‘New India 2022’.