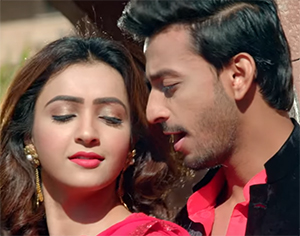 Arijit Singh has donned a music producer's hat for the two latest tracks of an upcoming Bengali film 'Tomake Chai'.

'Bhalolaage Tomake' and ‘Tomake Chai-Title Track' have been programmed, designed and sung by Singh himself. What makes these songs extra special is the use of live musicians for both the songs. Live piano, guitar and tabla - every instrument has been recorded live for the compositions.

Indraadip Dasgupta, ‘Tomake Chai's music director says, "Collaborating with Arijit Singh is always wonderful. We needed someone who understood the depth and passion of Tomake Chai's songs. The entire album exudes a vibe of extreme romanticism and Arijit has captured it superbly."

This week's new release ‘Bhalolaage Tomake' is a magical composition by Arijit Singh. It is a perfect love ballad for every couple wanting to express their feelings for each other. It is a romantic number in Indraadip Dasgupta's magical tunes, complimented by Prasen's passionate lyrics and sung by Arijit Singh & Annwesha. The video for the song has been beautifully shot against the backdrop of the exotic and serene Rajasthan desert.

'Tomake Chai - Title Track' speaks volumes about the feeling of falling in love and the desire to be with one's soul mate.It has already mesmerized the audiences with its depth and simplicity. Starring the much loved on-screen couple Bonny & Koushani, it captures the romantic mood of every generation with live piano played by Arijit Singh himself, and his melodious voice adding a dash of charm to it. The song video is set in the majestic Khimsar Fort of Jodhpur.