Issue of bringing water into concurrent list being discussed with States 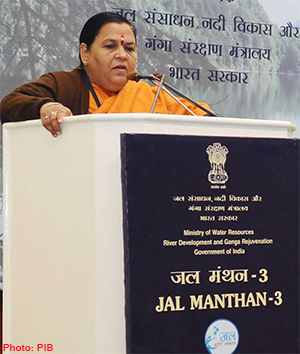 Union Minister for Water Resources, River Development and Ganga Rejuvenation Uma Bharti has said that centre is discussing the issue of bringing water into concurrent list with States. Inaugurating the Jal Manthan-III in New Delhi today she said her Ministry is also seriously working on new acts for water use and Ganga.

Deliberating on various issues related to water resources management, the Minister said water user associations are not performing up to the mark in some States. She said, “We may have to take active help from NGOs to strengthen these associations as active and performing water user associations are very important for the success of AIBP-PMKSY”. Underlying the need for peoples participation in Water Resources Management the Minister said there is a need to convert Jal Kranti into Jan Kranti.

Referring to inter-linking of rivers Sushri Bharti said her Ministry is trying its best to convert the funding pattern of Ken-Betwa Phase-I link from 60:40 to 90:10. She said the Ministry is very much hopeful to start the project in the first quarter of this year itself. The Minister said the project will be completed within seven years. The Minister also referred to Manas-Sankosh-Teesta-Ganga-Mahanadi-Godawari link and called it as “Mother link” of inter-linking of rivers in the country. Sushri Bharti said a section of the people in a particular state are opposed to this link and termed it as political. She said the successful completion of this link would be able to solve the drought and flood problems of the states of West-Bengal, Bihar and Odisha to a great extent. Sushri Bharti said the Damanganga-Pinjal link will be able to meet the drinking water needs of Mumbai upto the year 2060. She also referred to Par-Tapi link and said that on completion this link would be able to meet the drinking water needs of rural tribals of the area.

Dr Amarjeet Singh, Secretary in the Ministry referred to the need of common pooling of water resources by farmers. He said we have to fix the accountability of water use to stop its wastage. Shri said there an urgent need to develop a culture to understand the important of water conservation.

The daylong event has been organized by the Ministry of Water Resources, River Development and Ganga Rejuvenation with a view to have wider consultations among various stakeholders to brain-storm new ideas for solutions to various issues of water sector.

About 700 participants comprising Irrigation/ Water Resources Ministers of States/UTs, eminent experts in water sector, representatives of NGOs and senior officers of the Central and State Governments had consultations and discussions on Pradhan Mantri Krishi Sinchai Yojana, River Basin Management, River Rejuvenation and Ecology, Flood management, Water use efficiency and Participatory irrigation management. The focus was on refining policies of the Ministry to make them more people friendly and responsive to the needs of the states.

It may be recalled that the Union Minister for Water Resources, River Development and Ganga Rejuvenation Sushri Uma Bharati has emphasized the need to hold wider consultations amongst various stakeholders engaged in water resource development and management to achieve synergy of water resource development with environment, wild-life and various social and cultural practices. Jal Manthan programmes are being held to achieve this purpose. The earlier Jal Manthan Programmes held in November, 2014 and February, 2016 were hugely successful.