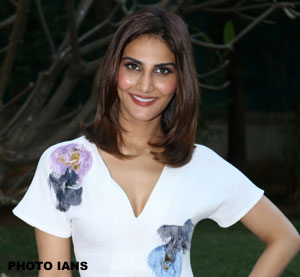 Actress Vaani Kapoor said, “I couldn't have asked for a better co-star. I have been saying that I want to work with Ranveer. I like him as an actor and as an audience, I love watching his films.”

She also said that she is lucky that she got to star along Ranveer Singh in her second film.

Actress Vaani Kapoor, who made her Bollywood debut with “Shuddh Desi Romance” said that, “I guess I am lucky that I got an opportunity in my second film...He's a great person.”

It was shot extensively in Paris. It is a story that celebrates being carefree in love. A quintessential Delhi boy Dharam (Ranveer Singh) comes to Paris for work in search of an adventure. Just when he was about to embark on this journey of his life he bumps into a wild, free spirited, French born Indian girl Shyra (Vaani Kapoor).

They were battling their ups and downs in the movie and then they both realize that love is a leap of faith that can only be taken by those who dare to love.