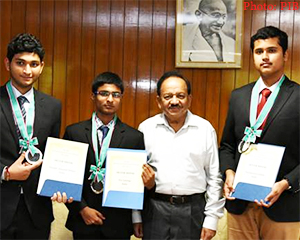 Three Indian high school students who won four silver medals in the 10th International Earth Science Olympiad, MIE Japan, called on the Minister for Earth Sciences, Dr. Harsh Vardhan, in New Delhi todaInternational Earth Science Olympiad (IESO) is an annual earth science competition for secondary school students and is conducted each year in a different country. It is an outreach programme and one of the main activities of the International Geoscience Educational Organization (IGEO), affiliated to the International Union of Geological Sciences (IUGS). This programme is aimed at training young minds and fostering earth science education for peace and harmony.

Students who are winners of the respective National Competitions are invited to participate in the IESO. There is a written and practical tests and the performances in these tests are awarded gold, silver and bronze medals. Team activities like International Team Field Investigation (ITFI) and Earth System Project (ESP) are unique to IESO programme in addition to the written and practical tests.

The motive behind these activities is co-operation, coming together and working in a team with students from different nationalities, diverse cultures and backgrounds and the main objectives are:

i) building ambassadors responsible for leading our Society towards respecting the Earth and its environment to spread scientific knowledge to tackle problems such as global warming and climate change;

ii) to create and introduce practical methods of reducing greenhouse gas emissions that can be applied in the present and the future;

iii) to develop renewable energy sources and encourage high resolution research and investment for eco-friendly technologies. And its ultimate goal is to convert the thoughts into action by educating the citizens of our planet in the conservation of the environment.

With this background; the Geological Society of India, Bangalore, which also shares similar objectives and as a part of its outreach programme towards popularizing Earth Sciences amongst school students, conducts every year the Indian National Earth Science Olympiad with the support of the Ministry of Earth Sciences, GOI. For this purpose, the selection of the Indian team takes place in two important steps. First an entrance test is conducted in centers for the school students studying in the 9th, 10, 11 and 12th standard. This year a total of nearly 3700 students appeared in the test in 70 centers. Twenty-one students were short listed to undergo summer training at Anna University, Chennai from 13th to 30th May 2016. An intensive training by the faculty members invited from Academia, Universities, Research institutions and Government organizations were imparted. At the end of the training programme, Indian National Earth Science Olympiad was conducted, both written and practical tests. Four students were selected on the basis of the merit out of the 20 students. It may be noted that for this purpose, selections and preparations starts a year ahead in November/ December and ends around July/August the next year. However, the selection for the IESO India team starts from the month of March and concludes in the month of August just before the International event.

This year a total of 10 gold, 20 silver and 30 bronze medals were distributed to the students; ranked based on the performance in the written and practical tests. Theory marks comprised 70%, while practical marks were 30%. Aditya Pal, Kolkata, Amarjeet Pandde (Mumbai) and Guhan Narayanan (Bangalore) were awarded silver medals. Guhan Narayanan won another silver medal for India in the team event. Under the guidance and stewardship of Dr. Godhavari (observer) and Prof. Hema Achyuthan (National coordinator and mentor) the students performed very well and made India, MoES, and the GSI feel proud of this feat.