Students should achieve excellence and contribute in the nation's growth: Arun Jaitley 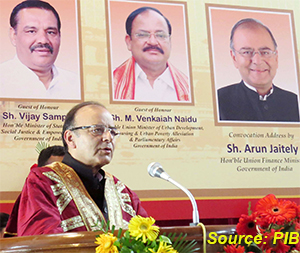 Delivering his convocation address at the 108th convocation of Khalsa College, Amritsar in the presence of Punjab Chief Minister Mr. Parkash Singh Badal, Shri Jaitley motivated the students to proceed with the motto of 'excellence' in their academic career to become a partner in the growth of the nation.

Focusing on the possibilities of religio-cultural tourism in Punjab, Mr. Jaitley said that the holy city of Amritsar has great potential in this field. He mentioned that Punjab had achieved a lot in agriculture, tourism, infrastructure and education and could explore more new avenues of growth.

Punjab Chief Minister Mr. Parkash Singh Badal in his address said that in this global competitive era, educational institutions should lay stress on quality and purposeful education. He said that during the last seven years Punjab had created exemplary infrastructure in the education sector and secured No. 1 position in the country. He said the state had also taken the lead by achieving 8 percent growth in the education sector and 20 percent in teaching faculty.

Apprising Finance Minister about the present edu-scenario in the state, Mr. Badal said Punjab had setup 11 universities and prestigious institutes in the state including Indian School of Business at Mohali and IIT Ropar. He also requested Finance Minister to visit the state once in a month to look into the development issues.