Salman Khan rocks in the Selfie Le Le Re Song 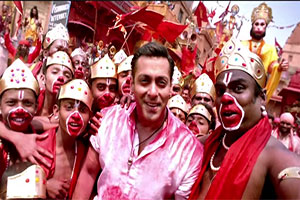 Salman Khan rocks in the Selfie Le Le Re Song of the film upcoming movie 'Bajrangi Bhaijaan', Youtube video of the song was released on 4th June.

Salman Khan's fans are enthusiastic and how! The social properties of 'Bajrangi Bhaijaan' yesterday stated that 'Selfie Le Le Re' was to release on 4th June. To add to the buzz, Salman announced a Selfie Contest just yesterday which has already crossed over 3800 entries. However, due to massive demand from the fans and huge entries for the contest, the makers of the film did not want to keep their fans waiting till tomorrow.

Like any Salman Khan song, 'Selfie Le Le Re' also seems to be a chartbuster. Starting with the chant, “Jai Jai Bajrang Bali, Tod De Dushman Ki Nali”, the song goes on and turns out to be a peppy number. With the chorus of this song, “Chal Beta Selfie Le Le Re E E EEE”, fans are going crazy clicking selfies for the contest. A few chosen ones will have the opportunity to feature in a fan version of 'Selfie Le Le Re' that is set to release soon.