PM's Remarks at the release of the book: Red Tape to Red Carpet... and then some 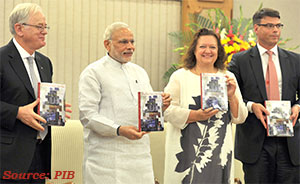 The Prime Minister, Shri Narendra Modi today said that the "industry of red tape" thrives on doubt, while the "road with red carpet" is built on trust. In his remarks at the India release of the book "Red Tape to Red Carpet... and then some," in New Delhi, the Prime Minister highlighted the people-friendly reforms initiated by the Union Government, to ease the regulatory environment in India. He said the most important reform for him has been to allow self-certification in various activities. "For misdeeds of a small number, we can't punish all the stakeholders. So, trusting the citizens, including the corporate citizens, is the essence of our reforms," the Prime Minister said.

The book has been written by Mrs. Gina Rinehart, the Chairperson of the Australian mining company Hancock Prospecting Group. The Australian Minister for trade and investment, Mr. Andrew Robb, and former Australian Prime Minister Mr. Paul Keating were present on the occasion.

Following are some excerpts from the Prime Minister's speech:

"Since last year, I and Prime Minister Abbot are actively engaged to harness the potentials for both sides. We have had extensive discussions during our two meetings since last year. The current visit of Mr. Andrew Robb is a further step in that direction."

"The analysis of Government policies by economists is different from that by those who are real stakeholders. I put the effort made by Mrs. Rinehart in the latter category."

"I believe that a human being is inherently good and he or she has to be given full freedom to make choices. This is the foundation of our steps which we have taken towards easing the regulatory environment in India. The most important reform for me so far is to allow self-certification in various activities. From students to entrepreneurs, we have allowed self-certification of documents and processes."

"For misdeeds of a small number, we can't punish all the stakeholders. So, trusting the citizens including the corporate citizens is the essence of our reforms. This is the basis of our efforts towards transition from 'Red Tape' to 'Red Carpet'."

"The industry of 'Red Tape' thrives on doubt. The road with 'Red Carpet' is built on trust. I am thankful to Mrs. Rinehart for highlighting the direction of our journey. "

"This book reminds me one of my old statements. I have been saying that the problems of public administration will end if politicians learn how to say 'NO' and if bureaucrats know how to say 'YES'. This is the reason that we have devoted maximum energy on changing the mindset."