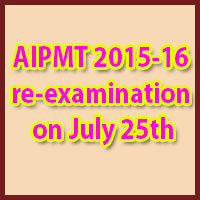 Earlier Supreme Court cancelled the AIPMT examination which was held on May 3 as it was "vitiated to the core by use of deceitful means and measures to benefit" some candidates.

Supreme Court further added "if such an examination is saved, merit would be a casualty generating a sense of frustration in the genuine students, with aversion to the concept of examination."

On June 15, Supreme Court asked the CBSE to re-conduct the AIPMT 2015-16 re-examination.