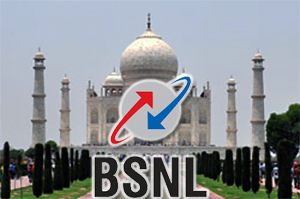 The facility has been created by BSNL with the optical fibre backbone using GPON technology which can provide backhaul broadband bandwidth upto 100 Mbps through BSNLs state of art MPLS network. BSNL would be providing free Wi-Fi services, for 30 minutes per 24 hrs (three time in a month) which visitors can utilize in multiple sessions. After free usage limit of 30 minutes is exhausted, a customer can continue using the service on paid basis for which subscription plans are available in the denomination of Rs. 20/-, Rs. 30/-, Rs. 50/- and Rs. 70/- for validity of 30 min, 60 min, 120 min and one day respectively.

BSNL has also planned to expand the coverage of the wi-fi facility to other tourist & religious locations like Khajuraho, Jagannath puri etc by March 2016.

Minister of Communications & IT Shri Ravi Shankar Prasad informed that BSNL has plans to invest more than 1200 crores in UP(W) Circle during 2015-16. Out of this approx. Rs. 200 crores will be invested in upgrading and expanding mobile network.

A total of 795 number of new 2G BTSs sites are being commissioned in all Secondary Switching Areas (SSAs) of UP(W) Circle to increase the coverage of BSNL mobile services. BSNL is expanding its 3G network in all SSAs by installing a total of 596 new 3G BTSs. This expansion will help in providing improved 3G services to existing BSNL subscribers as well as in 152 new cities/towns.