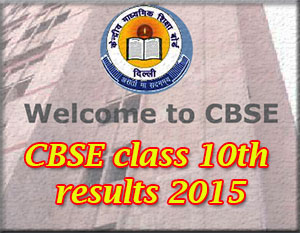 CBSE class 10th results 2015 will be declared on 28th May 2015 by the Central Board of Secondary Education (CBSE) as per an official notification released by the board on its official website.

The results of CBSE class 10th 2015 is available on the official website of CBSE athttp://cbseresults.nic.in/. Moreover, candidates can also check their results via SMS.

The CBSE class 10 Examinations 2015 were conducted by 13 lakhs students appeared for CBSE Class 10 board Examination from March 2015.

Central Board of Secondary Education, was established 1962 in Delhi.

The candidates are required to type just CBSE10 space your roll number and send to 57272 and get your result via SMS.

To obtain CBSE results of Senior School Certificate Examination 2015(Class X) through SMS, different numbers have been provided by CBSE for different users, which are:

Moreover, lakhs of students have appeared for the CBSE Class 10th examination 2015 and awaiting their results as many states have already declared their class 10th board results 2015. The results will open the gates for admission in higher education.

Newstrackindia.com wishes all the candidates 'GOOD LUCK' for their CBSE 10th results 2015.