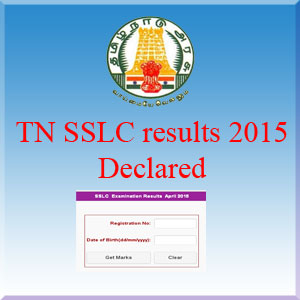 SSLC Result 2015 for Tamil Nadu declared and students waiting for TN SSLC results 2015 should check it on on tnresults.nic.in. The examination for the 10th class was conducted by the Tamil Nadu Board of Secondary Education (TNBSE) in the months of March/April in State.

This year 91.78% passed the examination.

TN SSLC results 2015 is announced and the wait for the students are over now. Tamil Nadu Class 10 SSLC Results 2015 Announced. Students can check the results on the official website of the Tamil Nadu State Board of Secondary Education (TNSBSE).

Government of TamilNadu Directorate of Government Examinations, had successfully conducted the SSLC class 10th and HSC Class 12th examination in March 2015 and students all across the TamilNadu appeared for these examinations in a huge number and are eagerly waiting for their results.

According to TamilNadu official website, TN SSLC results 2015 is to be declared on 21st May, and for this announcement is already appearing of the official website of the Board.

Students who have appeared for the Tamilnadu SSLC 2015 examination can check their results at http://tnresults.nic.in/ or on the official website of overnment of TamilNadu Directorate of Government Examinations: http://dge.tn.gov.in/.