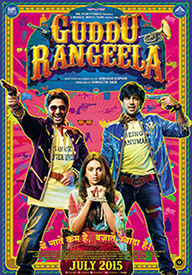 Mumbai, May 14, 2015: The first poster of 'Guddu Rangeela', the upcoming comedy film by Producer Sangeeta Ahir's Mangal Murti Films Pvt. Ltd. and Fox Star Studios has been released. The poster features Arshad Warsi, Amit Sadh and Aditi Rao Hydari giving the audience a sneak-peek into their characters from the film. Set against a bright pink backdrop, it showcases Arshad and Amit as two unruly men with guns - Guddu and Rangeela, along with the beautiful Aditi Rao Hydari whose hands are tied by a rope.

Speaking about the film, producer Sangeeta Ahir said, “The Guddu Rangeela team has been great to work with. Subhash Kapoor, Arshad Warsi and Amit Sadhare are extremely talented men and working with them has been really enriching for every one of us. With this first poster, we will be providing the audience with a glimpse of the rollercoaster ride that the film promises to be. We hope the audience enjoys it because we certainly enjoyed making it.”

Directed by Subhash Kapoor, 'Guddu Rangeela' is a comedy film starring Arshad Warsi, Amit Sadh and Aditi Rao Hydari in lead roles. The film is produced by Mangal Murti Films Pvt. Ltd. along with Fox Star Studios and is set to release in July 2015.